Boeing's 737 Max update to be submitted in the 'coming weeks'

By Nicholas Sakelaris and Darryl Coote 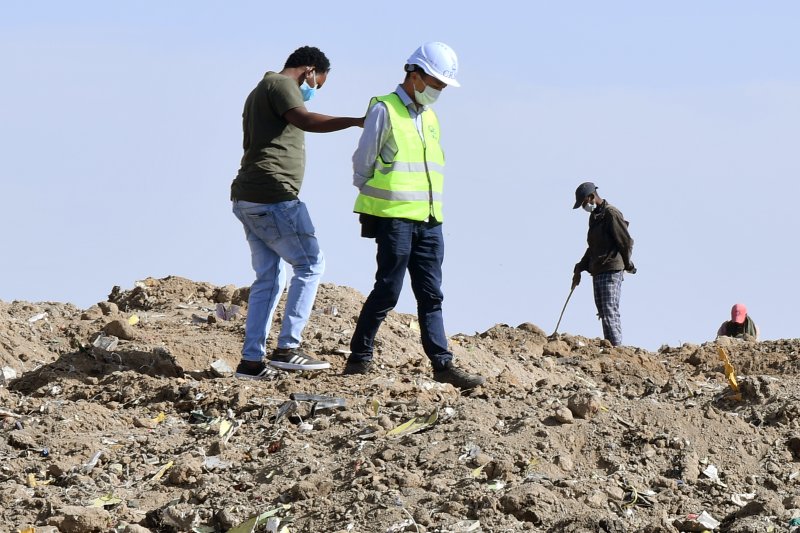 Rescue workers search the crash site for wreckage from an Ethiopia Airlines Boeing 737 Max 8 near Bishoftu, Ethiopia, on March 13. Photo by EPA-EFE

"Time is needed for additional work by Boeing as the result of an ongoing review of the 737 Max Flight Control System to ensure that Boeing has identified and appropriately addressed all pertinent issues," the FAA said in a statement.

The FAA said that once it receives the updates, they will be subjected to a "rigorous" safety review.

"The FAA will not approve the software for installation until the agency is satisfied with the submission," it said.

A preliminary report on the crash was expected to be completed Monday, the Ethiopian foreign ministry said. Its findings of which could confirm a theory that the jetliner's anti-stall system malfunctioned -- the same flight system suspected to have caused another Max 8 to crash in Indonesia last fall, killing 189 people.

On the plane's cockpit voice recorder, a pilot is heard yelling, "pitch up, pitch up" in the moments before the crash -- a possible indication the automated system had forced the aircraft into a dive, the standard maneuver for recovering from a stall. An airplane enters a stall when it no longer has enough speed to generate lift beneath the wings. The best way to recover is to put the plane's nose down, an attempt to pick up speed, and regain lift -- but only as long as there's sufficient altitude to perform the maneuver.

The Indonesia crash prompted Boeing to work on a software fix and the company was close to finishing it when the Ethiopian plane went down. Officials said pilots from various airlines are now testing the system in flight simulators. Boeing unveiled the software update last week.

As the investigation moves forward, the U.S. Transportation Department is looking into what caused both crashes and how the FAA certified the plane to fly. The 737 Max 8 entered service in 2017.

The FAA said last week it will increase oversight by this summer. Acting FAA chief Daniel Elwell told Senate lawmakers an amended certificate had been given Boeing because the Max 8 and Max 9 were very similar to the company's older 737 models. A Max 10 is presently waiting to enter service.

"The fact is the FAA decided to do safety on the cheap which is neither cheap nor safe and put the fox in charge of the hen house," he said at last week's hearing.

World News // 13 hours ago
Apple says it will produce iPhone 14s in India
Sept. 26 (UPI) -- Apple took a significant pivot away from using China as a production hub on Monday by announcing it will make its flagship iPhone 14 in India.

World News // 14 hours ago
Canada, possibly North Korea, to address United Nations
Sept. 26 (UPI) -- In the final day of scheduled speeches at the United Nations General Assembly on Monday, Canada's Foreign Affairs Minister Melanie Joly will address the crowd while a spot has been left open for reclusive North Korea.

World News // 14 hours ago
Man shoots Russian military commander amid draft protests
Sept. 26 (UPI) -- A Russian military officer in charge of a local draft to sign men up for the war in Ukraine was seriously injured in a shooting attack meant as a protest against President Vladimir Putin's widening invasion.

World News // 16 hours ago
Hurricane Fiona kills 73-year-old Canadian woman
Sept. 26 (UPI) -- Authorities in Newfoundland have recovered the body of a 73-year-old woman who was swept away from her home by a giant wave as post-tropical storm Fiona came ashore early Saturday.
Advertisement