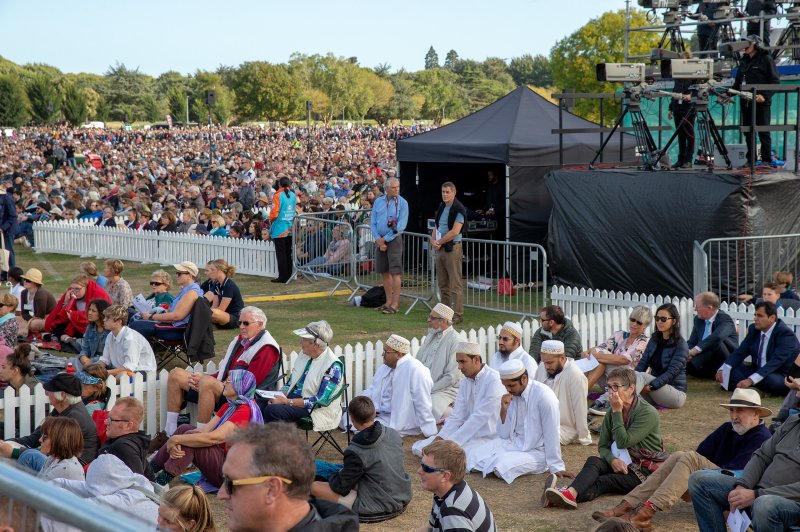 About 20,000 people attended the National Remembrance Service Friday to remember the victims of the Christchurch shooting attacks. Photo by Martin Hunter/EPA-EFE

March 29 (UPI) -- Thousands gathered in New Zealand Friday to remember the 50 people killed by a gunman at a pair of mosques in Christchurch two weeks ago.

The service was attended by residents, relatives, politicians and other public figures. The names of all 50 victims were read at the memorial.

Security was tight at Hagley Park before and during the service, with hundreds of police officers. A helicopter circled the event and police commissioner Mike Bush called it one of the largest security operations in New Zealand history.

"Those who control their anger and pardon their fellow human, Allah loves those who are good-doers," Ahmed said. "Allah says that if we forgive one another, he loves me, he loves us."

Federation of Islamic Associations of NZ President Mustafa Farouk said Ardern and the Muslim community have "shown the world how to live with compassion.

"Let's continue to build a future of togetherness, of connectedness."

Several high schools closed for the service so students could attend. The memorial was put together by the Muslim community, the Christchurch City Council, central government and Ngai Tahu. It included performances by singer Yusuf Islam, previously known as Cat Stevens, Marlon Williams and several Kiwi performers.

World News // 1 hour ago
UNESCO report recommends adding Great Barrier Reef to 'in danger' list
Nov. 29 (UPI) -- Efforts to cut pollution damaging Australia's Great Barrier Reef are not enough and the system should be placed on a list of sites in danger, according to a United Nations mission report.

World News // 8 hours ago
EU agrees to make sanctions evasion a crime
Nov. 28 (UPI) -- Members of the European Union have unanimously agreed to add sanctions evasion to its list of EU crimes as the bloc continues to seek ways to punish Russia over its war in Ukraine.

World News // 21 hours ago
Iran wants Team USA kicked out of World Cup over flag image
Nov. 28 (UPI) -- A state-affiliated Iranian news agency on Sunday called for the United States to be kicked out of the World Cup for releasing an edited image of the Iranian flag in support of protesters there.