3 charged for dumping chemicals into Malaysian river that sickened thousands 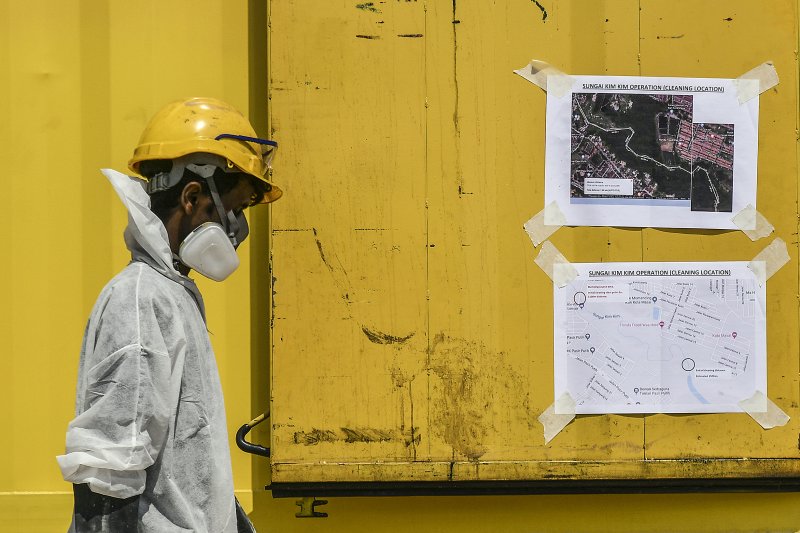 An emergency personnel officer wearing protective suit passes by the maps with the location of cleaning up the Sungai Kim Kim river in Pasir Gudang, state of Johor, Malaysia. Photo by Abdul Wahub/EPA-EFE

March 24 (UPI) -- Three men have been charged in connection to chemicals having been dumped into Malaysia's Sungai Kim Kim river, resulting in thousands of people falling sick.

Wang Jin Chao, 34, and Yap Yoke Liang, 36, directors of a tire processing factory in Pasir Gudang, are accused of colluding with N. Maridass, 35, a truck driver, to dispose of chemicals into the river without the approval of the Department of Environment between 12 a.m and 1 a.m. March 7, the New Straits Times reported.

They have been charged with the illegal disposal of chemicals under the Environment Quality Act of 1974.

Wang is from Singapore while Yap and Maridass are Malaysian.

Following the dumping of chemicals into the river, almost 6,000 people reported to hospital for treatment. Over 110 schools in the area were closed due to fear of more people falling ill.

"All the accused were arrested in different locations - Batu Gajah in Perak and Segamat and Yong Peng in Johor - which, we believe, was because they were trying to run and hide," he said.

Meanwhile, Malaysian police have reached out to their Singaporean counterparts to help track down a fourth suspect connected to the dumping incident, The Star reported.

A total 11 people have been arrested, but aside from the three charged all were released.

State police chief Datuk Mohd Khalil Kader Mohd has called on the public to be patient as it works to bring the fourth suspect, the owner of the tire-processing company, into custody.

"The most important thing is we have managed to apprehend the three main suspects in this case," he said at a press conference at the state police headquarters.

He said police are working to create an "air-tight" case against the suspects and that takes time.

"So I urge netizens not to hurt the feelings of my officers and personnel, who have been working hard to rectify the situation for the well-being of the people of Johor," he said.

The trial is set for April 30.

More charges are expected to be laid against the defendants.

World News // 13 hours ago
Prince Harry says there was 'no other option' but to reduce title
Jan. 20 (UPI) -- Prince Harry, in his first public comments since announcing he and wife Meghan Markle will reduce their roles as British royals, said Sunday there was "no other option."