March 15 (UPI) -- After a brief dispute over who would forensically examine them, the "black boxes" from an Ethiopian airliner crash that killed 157 are being heavily scrutinized by investigators in France.

French aviation officials began examining the flight data recorder and cockpit voice recorder from Ethiopian Airlines Flight 302 on Friday, searching for clues as to why the new Boeing 737 Max 8 crashed after takeoff from Addis Ababa on Sunday.

Investigators from the U.S. National Transportation Safety Board wanted to analyze the boxes, but Ethiopian officials felt it would be better for another country to do it due to concerns with potential conflicts of interest in the United States, where Boeing is a staple in the aviation industry.

The United States was one of the last countries to ground the Max 8 aircraft, following Britain, the European Union, Canada and many others. That delay has the public and federal lawmakers questioning the Federal Aviation Administration. Thursday, acting FAA chief Dan Elwell appeared in the House to brief lawmakers on the matter.

"We plan to conduct rigorous oversight with every took at our disposal to get to the bottom of the FAA's decision-making process," Reps. Peter DeFazio of Oregon and Rick Larsen of Washington, the panel's ranking members, said in a joint statement.

Elwell told NPR the agency took action after evidence in Ethiopia resembled that from another Max 8 crash in Indonesia last fall.

"That, coupled with some physical evidence we found at the crash site, led us to believe that the similarities were too great not to consider that there was a common thread, he said.

Elwell said the agency took days to order the grounding because there was no data initially that firmly linked the two crashes.

The 737 Max 8 could be grounded in the United States until at least April, lawmakers indicated, because software fixes and pilot retraining will probably take weeks to complete. Analysts have said Boeing faces billions in losses due to the aircraft being taken out of service.

A preliminary investigation into the October crash pointed to a faulty sensor that caused an automated system to push the nose of the plane down. Preliminary flight data in Ethiopia show the plane also struggled to gain altitude after takeoff.

Acting Defense Secretary Patrick Shanahan, a former Boeing executive, told lawmakers Thursday he would support a Pentagon investigation into whether he acted inappropriately in promoting Boeing, a major defense contractor, in his work for the department. He also said he hadn't discussed the Max 8 crashes with anyone in the Trump administration.

World News // 16 hours ago
BTS member Jimin's 'unwashed' costume to go on auction
April 19 (UPI) -- A traditional Korean garment BTS band member Jimin wore during a performance on NBC's "The Tonight Show" is to be sold at a South Korean auction. 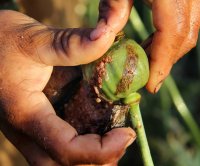 World News // 19 hours ago
Fires burn out of control for 2nd day in South African capital
April 19 (UPI) -- Authorities in South Africa said they have arrested a man who may be responsible for multiple fires that continue to burn Monday.