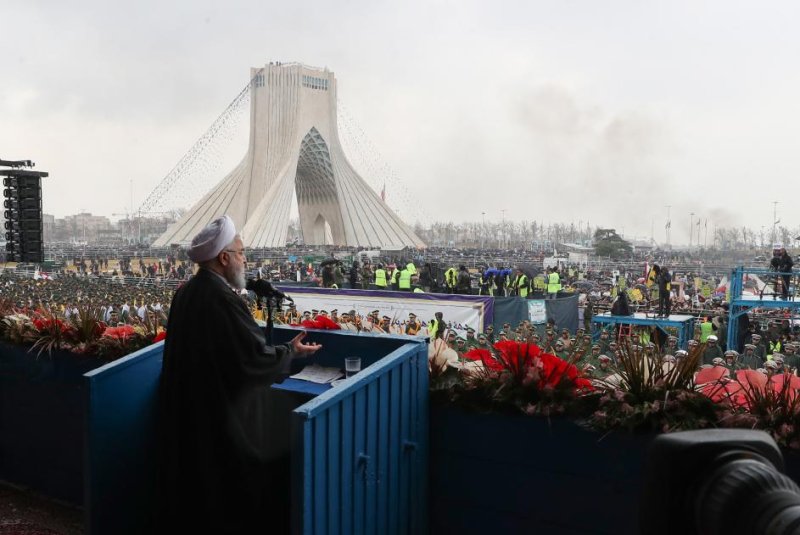 Iranian President Hassan Rouhani speaks Monday during a ceremony marking the 40th anniversary of the 1979 Islamic revolution, at the Azadi square in Tehran, Iran. Photo by Iranian President Office/EPA-EFE

Feb. 11 (UPI) -- Iran on Monday marked the 40th anniversary of the Islamic Revolution with rallies around the country and a speech by President Hassan Rouhani.

"This nation has managed to establish a system of Islamic Republic and an independent system of government," Rouhani said, adding that Iran has foiled conspiracies led by the United States and Israel.

The revolution marked the return of exiled cleric Ayatollah Ruhollah Khomeini, an outspoken critic of former Iranian ruler Mohammad Reza Shah Pahlavi in 1979. Pahlavi left the country a month before the revolution for cancer treatment and never returned. The shah later traveled to the United States for treatment, a move that spurred Islamic students to take over the U.S. Embassy in Tehran and hold dozens of American workers for 444 days.

Present relations between the United States and Iran have frayed further under the administration of U.S. President Donald Trump, who abandoned the 2015 multi-national nuclear agreement in favor of new, tougher sanctions.

"The presence of people in this celebration means that plots by the enemies... have been defused," Rouhani said in his nationally-televised speech. "They will not achieve their ill-omened aims."

RELATED U.S. should not fear prospect of regime change in Iran

World News // 17 hours ago
Israel moves forward with Sunday's flag march despite concerns over violence
May 27 (UPI) -- A controversial flag march in Jerusalem on Sunday will go through the Damascus Gate and the Muslim Quarters, sparking concerns of violence as the event leads to the Western Wall.

World News // 1 day ago
Former Louvre director charged in fraud, trafficking case
May 26 (UPI) -- A former director of the Louvre Museum in Paris is facing charges related to trafficking and fraud accusations.