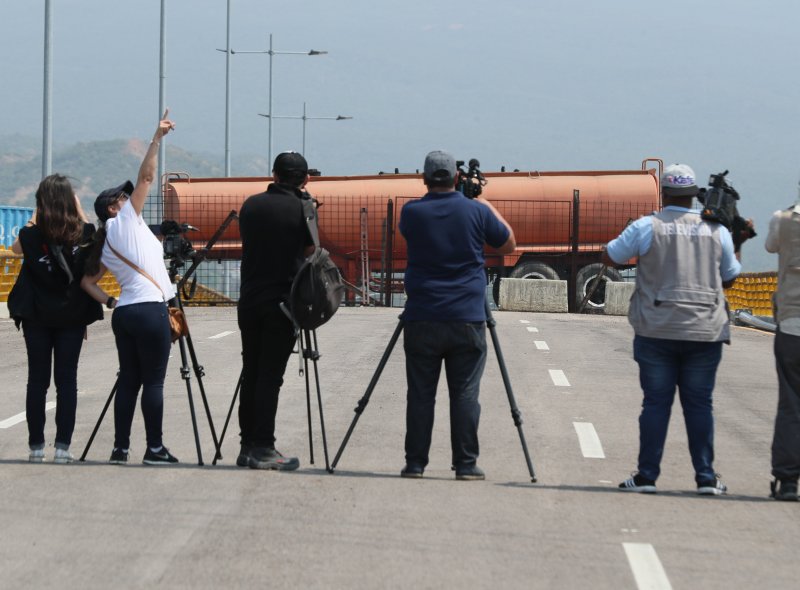 A bridge between Colombia and Venezuela near Cucuta, Colombia, was blocked by the Venezuelan army to prevent humanitarian aid announced by Venezuelan National Assembly President Juan Guaido, but opposed by Venezuelan President Nicolas Maduro. Photo by Mauricio Duenas/EPA-EFE

Feb. 6 (UPI) -- The Venezuelan military used two containers and a liquid tank carrier to block travel lanes of a bridge connecting the country to the Colombian city of Cucuta.

According to a report in El Nacional on Wednesday, Venezuelan military forces blocked the roads Tuesday.

The blockade occurred as Juan Guaido, the National Assembly president leading defiance to Venezuelan President Nicolas Maduro, said Cucuta would be the center of international aid arriving for Venezuelans. About 3 million Venezuelans have left the country in recent years. Those who remain are enduring the collapse of the nation's economy, resource scarcity and political violence, as Venezuela held Latin America's largest homicide rate in 2018.

A number of planes hauling aid arrived in neighboring Colombia, Colombian Foreign Minister Carlos Holmes said Wednesday, adding that a collection center has already been set up in Cucuta.

The United States, Canada and other countries are among those contributing to the aid effort. On Wednesday, Puerto Rican officials sent what they said was their first plane loaded with aid supplies for Venezuela.

"The Venezuelan people desperately need humanitarian aid. The U.S. and other countries are trying to help but Venezuela's military under Maduro's orders is blocking aid with trucks and shipping tankers," U.S. Secretary of State Mike Pompeo said on Twitter.

Maduro said in a report by Venezuelan television network TeleSur that the aid, which he said is $20 million financed by the United States, is nothing compared to some $23 billion he said Venezuela has lost because of U.S. sanctions. The International Committee of the Red Cross has been made aware that Venezuela rejects the aid, media reported.

Guaido has worked to unify opposition demands into three goals: the end of what the National Assembly considers to be Maduro's wrongful claim to power, the start of a transitional government and free elections.

The aid will be directed to those that most need it, initially at hospitals. Food and medicine are expected to later reach more people.

Guaido is simultaneously working with foreign governments to increase recognition of his interim leadership in defiance of Maduro, who still has the support of Venezuela's military officials.

The Venezuelan opposition claims the presidency became vacant on Jan. 10, because Maduro's re-election in 2018 was illegal. They said the election was illegal because the opposition did not participate, and because the government did not offer enough guarantees voting would be fair.

Guaido declared himself interim president on Jan. 23, the same day U.S. President Donald Trump recognized his position. Aid is the key first step needed to save hundreds of thousands of Venezuelans, Guaido has said.

World News // 22 hours ago
Pandemic-led recession 'way worse' than 2008 crisis, IMF says
April 3 (UPI) -- The best way to limit the coronavirus pandemic's impact on the global economy is to focus on mitigating the spread of the disease, world health and financial leaders said Friday.

World News // 15 hours ago
Sri Lanka cremation rule draws ire from Muslim families, Amnesty Int'l
April 3 (UPI) -- Families in Sri Lanka are denouncing their government for cremating the bodies of Muslims who died from the coronavirus disease -- a dispute that drew support Friday from Amnesty International.

World News // 16 hours ago
North Korea reveals over 500 people under quarantine
April 3 (UPI) -- North Korea disclosed more than 500 people have been quarantined in the country even as restrictions against resident foreigners may have been eased this past week.

World News // 18 hours ago
Pakistan prevents release of 4 cleared in 2002 death of Daniel Pearl
April 3 (UPI) -- A provincial government in Pakistan on Friday prevented the release of four men suspected in the 2002 death of Wall Street Journal reporter Daniel Pearl, a day after a court cleared them.