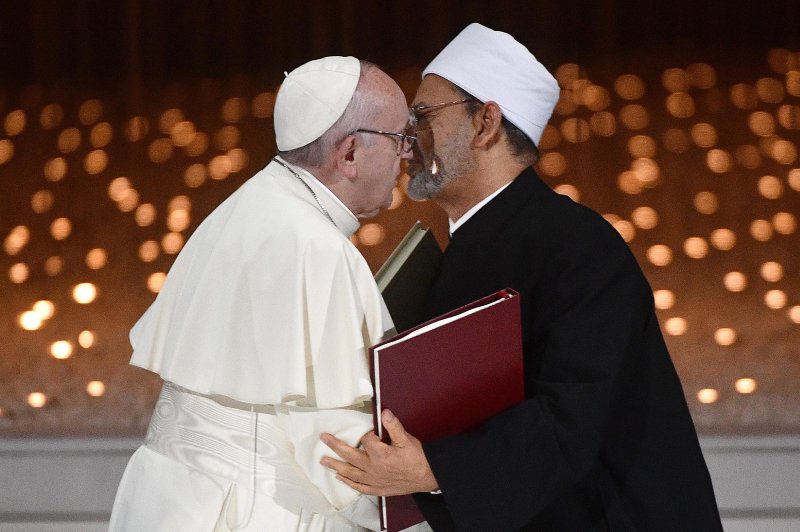 Feb. 4 (UPI) -- Pope Francis, the leader of the world's Catholics, and Sheikh Ahmed al-Tayeb, the head of Sunni Islam's most prestigious seat of learning, signed a historic declaration calling for peace among nations, religions and races on Monday.

Francis became the first pontif to visit the Arabian peninsula, which is the birthplace of Islam, during a three-day visit to Abu Dabi, United Arab Emirates.

On Tuesday morning, around 135,000 turned out for Holy High Mass at the Zayed Sports City Stadium. People chanted "Pope Francis" and "Viva El Papa" as he waved at them aboard the popemobile.

The document, which was signed at a gathering of religious leaders from Christianity, Islam, Judaism and other faiths, pledges peace, freedom and women's rights.

"Faith leads a believer to see in the other a brother or sister to be supported and loved," according to the preface.

"From our fraternal and open discussions, and from the meeting that expressed profound hope in a bright future for all human beings, the idea of this Document on Human Fraternity was conceived. ... It is a document that invites all persons who have faith in God and faith in human fraternity to unite and work together so that it may serve as a guide for future generations to advance a culture of mutual respect in the awareness of the great divine grace that makes all human beings brothers and sisters."

The document urged tolerance, declaring they "call upon ourselves, upon the leaders of the world as well as the architects of international policy and world economy, to work strenuously to spread the culture of tolerance and of living together in peace; to intervene at the earliest opportunity to stop the shedding of innocent blood and bring an end to wars, conflicts, environmental decay and the moral and cultural decline that the world is presently experiencing."

The document pledges that the fight against extremism must be fought in the name of "all victims of wars, persecution and injustice." Otherwise they warn of a "third world war being fought piecemeal."

During a 26-minute address Monday night, the pope called for an end to wars in the Middle East, naming Yemen, Syria, Iraq and Libya. All religious leaders have a "duty to reject every nuance of approval from the word war."

The UAE has been involved in the Saudi-led military coalition in the war in Yemen.

Pope Francis said he appreciates "the opportunity to come here as a believer for peace ... We are here to desire peace, we are here to promote peace, to be instruments of peace."

The sheikh, during his address, called the pope "my dear brother."

He said Muslims have been portrayed as "savage barbarians."