Jan. 28 (UPI) -- The United Nations' investigation into the death of Saudi journalist Jamal Khashoggi started Monday with a special meeting of experts and officials in Turkey.

Agnes Callamard, the U.N. special rapporteur on extrajudicial, summary or arbitrary executions, met with Foreign Minister Mevlut Cavusoglu to talk about how Khashoggi was killed and what could be done to prevent future incidents.

The week-long probe will "assess the steps taken by governments to address and respond to the killing, and the nature and extent of states' individuals' responsibilities for the killing."

"The inquiry will also seek to identify ways by which states can strengthen fulfillment of their international commitments to protect the right to life, prevent violations and ensure accountability," Callamard said in a statement.

The case will also be evaluated from a human rights perspective.

Callamard will report her findings to the U.N. Human Rights Council in June.

Khashoggi, a Saudi Washington Post columnist, was killed at the Saudi consulate in Istanbul on Oct. 2. Riyadh changed its story multiple times, first saying it was rogue agents and later saying it was a botched kidnapping. Finally, it acknowledged an assassination team intended to kill the journalist, who'd regularly criticized the Saudi royal family in his writings.

So far, Crown Prince Mohammed bin Salman has stayed above the fray, despite intelligence reports that he ordered the killing.

Turkey has sought to extradite the Saudis responsible for Khashoggi's death but Saudi Arabia has remained adamant that it will handle the case itself. Saudi prosecutors have indicted 11 of 21 suspects arrested in the killing and are seeking the death penalty for five of them.

World News // 4 hours ago
Delivery service criticized in China for suspending BTS-related packages
Oct. 20 (UPI) -- A Chinese delivery service that said it had stopped transportation of all packages related to BTS is under fire for the statement posted to a local social media platform. 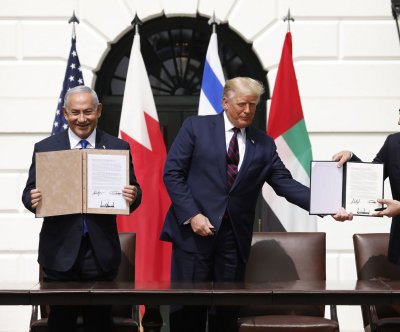