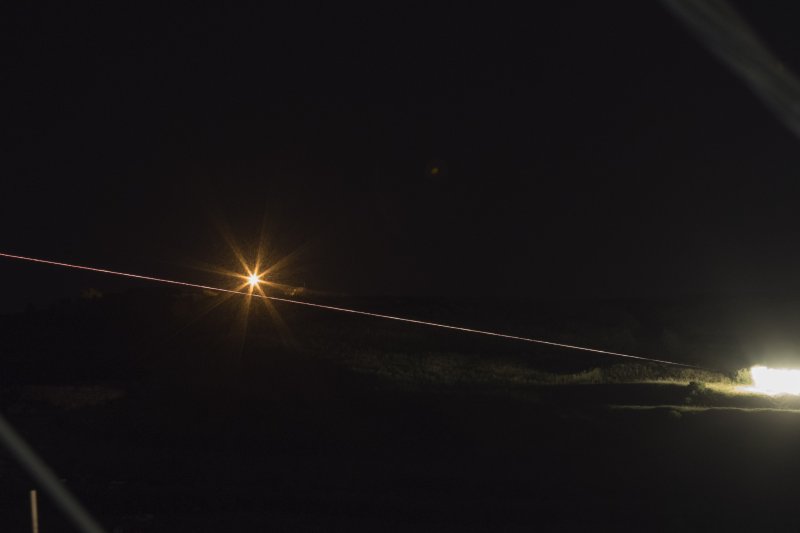 A long exposure picture shows Israeli artillery deployed missiles toward Syrian military targets, on the Golan Heights, next to the Israeli-Syrian border on May 10. File Photo by Atef Safadi/EPA-EFE

"We warn the Syrian Armed Forces against attempting to harm Israeli forces or territory," the IDF said in the tweet.

We have started striking Iranian Quds targets in Syrian territory. We warn the Syrian Armed Forces against attempting to harm Israeli forces or territory.

The airstrikes destroyed weapon stores and military positions of Iran's elite Quds Forces and Lebanese Hezbollah near Damascus International Airport as well as in the areas of Al-Kiswah and Jamraya, the Syrian Observatory for Human Rights said on its Facebook page.

SANA, Syrian state media, said Israel launched guided missiles in successive land and airstrikes, and that most of the missiles had been shot down.

The number of casualties was unknown.

The Israeli attack follows a rocket having been fired from Syria at the northern Golan Heights some hours earlier, but it was intercepted by the nation's Iron Dome Aerial Defense System, the IDF said in a tweet.

A short while ago, a rocket was fired at the northern Golan Heights and was intercepted by the Iron Dome Aerial Defense System. pic.twitter.com/RXM7OvdeyJ

The missile was intercepted near the mount Hermon ski resort causing it to be closed due to worries of further attacks, The Times of Israel reported.

World News // 10 hours ago
British-Iranian woman targeted by Iran's government could be headed back to prison
Oct. 16 (UPI) -- An Iranian appeals court has upheld the sentence for Nazanin Zaghari-Ratcliffe, a British-Iranian aid worker accused of plotting against the country's Islamist government.

World News // 14 hours ago
Italy rolls out Green Pass amid anti-COVID-19 mandate protests
Oct. 16 (UPI) -- Italy has rolled out its Green Pass, a government-issued health pass for citizens to work amid the pandemic, prompting protests.