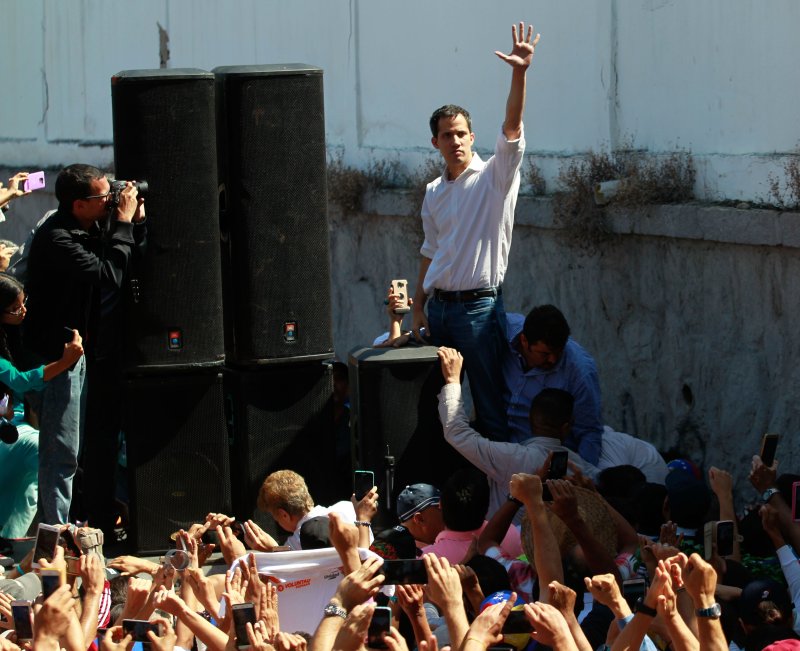 Juan Guaido, president of the National Assembly of Venezuela, speaks in Caraballeda on Monday. Photo by Cristian Hernandez/EPA-EFE

Jan. 18 (UPI) -- Venezuelan National Assembly President Juan Guaido has reiterated calls for broad sectors of the country to protest next week against leader Nicolas Maduro, whom he calls an "usurper."

He's seeking to unify the opposition behind three main demands -- stopping the "usurpation," a transitional government and free elections.

"We continue to build alliances inside and outside our borders to re-establish constitutional order in Venezuela," Guaido tweeted Friday. Earlier, he said he and the National Assembly vice president have worked with diverse organizations to coordinate the demonstrations.

"Alone we cannot, but If we're together nothing will stop us," he said. "Let us all hit the streets to raise our voice for Venezuela."

According to tweets shared on his page, groups of teachers, doctors and civil organizations from different areas will take part in the protests.

A report in El Nacional said political leaders will provide details of protest plans on Wednesday, the same day of the protest, which has been described as "the first call to action" to remove Maduro from power.

The date was chosen because it's the 61st anniversary of the fall of Marcos Perez's dictatorship.

RELATED Maduro raises minimum wage in Venezuela to $6 per month

"Count on me to advance with strength in that route," opposition leader Maria Corina Machado tweeted. "Citizens, civilians and the military, and the democratic world, let us take advantage of this great opportunity."

"We urge those who support this regime, from every day employees getting by on food subsidies to the Venezuelan security forces sworn to support the constitution, to stop enabling repression and corruption and to work with the National Assembly and its duly elected leader, Juan Guaido," the department said Jan. 10.

The 35-year-old Guaido, an industrial engineer, said he was detained briefly during the weekend but then let go by the Venezuelan security forces. The detention occurred after the National Assembly declared the Venezuelan presidency void, on grounds that Maduro's 2018 re-election was not legal.

The opposition-led National Assembly has been competing against the Constituent Assembly, which was elected in 2017 and supports Maduro. Venezuelan military leaders have also supported Maduro, who was sworn in last week for a second term.

The National Assembly has offered to pardon military members and civilians that now support Maduro as long as they start to contribute to "restitution of democracy" in Venezuela.

The United States, European Union, Organization of American States and several Latin American countries have not recognized the legitimacy of Maduro's second term. Nations that have include China, Russia and Mexico.

In previous years, some protests against Maduro and predecessor Hugo Chavez have turned deadly. Last year, Venezuela became the Latin American country with the greatest rate of homicides, in part due to security force attempts to repress the population.

As many as three million Venezuelans have left the country in recent years to escape political violence and a chaotic economic situation that's seen hyperinflation and scarcity of food and medicine.

Over the past year, there have been disagreements between groups that favor dialogue with the government -- and others, like Machado's, that favor disobedience to Maduro's authority.