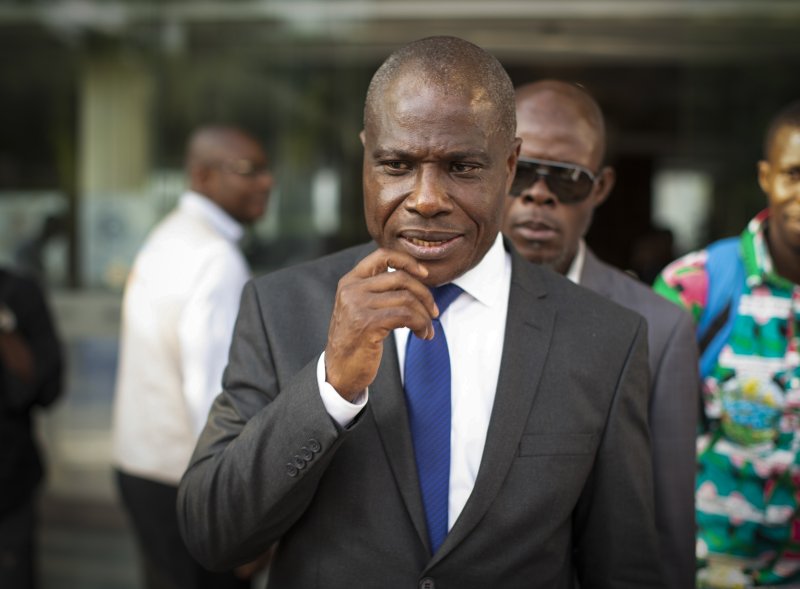 Martin Fayulu, the Democratic Republic of the Congo presidential candidate, appears on election day on Dec. 29 in Kinshasa. Fayuli is contesting the results. Photo by Stefan Kleinowitz/EPA

Jan. 12 (UPI) -- Martin Fayulu, the runner-up presidential candidate in the Democratic Republic of Congo, has gone to court to challenge the election results.

Another opposition candidate, Felix Tshisekedi, was declared the winner Thursday by the electoral commission but Fayulu's coalition said Friday he captured 61 percent of the vote in the Central African nation, Voice of America reported.

They cited figures from the Catholic Church, which placed 40,000 election observers across the country. The coalition said Tshisekedi won 18 percent of the vote.

The results from the Dec. 30 election are due to be published by Sunday and the new leader will inaugurated Tuesday.

Fayulu has asked the Constitutional Court to order a full manual recount.

He planned to go to the court in Kinshasa but Republican Guard soldiers and police had earlier surrounded his house and intimidated supporters, Fayulu said.

"Kabila's presidential guard penetrated inside my property today to prevent me from submitting my appeal at the Constitutional Court," he posted Saturday on Twitter. "Fear is still on their side."

In an interview with CNN, Fayulu said he had called Leila Zerrougui, the United Nations secretary-general's representative in the country, and subsequently the Republican Guard soldiers started leaving.

"They want to intimidate me for the next stage. I think they don't want people to be with me when I go to the court. Even if they are there, I will go," he told CNN.

On Thursday, the United States demanded the nation release "accurate" election results and warned sanctions will imposed against anyone who tries to undermine Congo's democracy.

Fayulu said Tshisekedi has been aligned with Kabila.

Under the DRC's constitution, a president can serve only two terms. Kabila's second term expired in 2016.

The election would be the country's first democratic transition of power since it gained independence from Belgium in 1960.

World News // 1 hour ago
European Union agrees to ban products tied to deforestation
Dec. 6 (UPI) -- The European Union on Tuesday provisionally agreed to a new law that would ban importing products connected with deforestation, a win for environmentalists.

World News // 5 hours ago
Al Jazeera asks for ICC to investigate Abu Akleh's death
Dec. 6 (UPI) -- The Al Jazeera Media Network said it officially filed a request to the International Criminal Court to conduct an investigation and prosecution of those responsible for the death of its journalist Shireen Abu Akleh in th

World News // 6 hours ago
Russia ramps up missile attacks on Ukraine after airfields hit
Dec. 6 (UPI) -- Russia slammed Ukraine with another barrage of missiles Monday night into Tuesday, hitting electrical plants and other civilian infrastructure facilities as another explosion hit a Russian airfield.