Saudi teen given refugee status, Australia considering visa for her

Jan. 9 (UPI) -- A Saudi woman who fought deportation from Bangkok back to her family by barricading herself in a hotel room was granted refugee status by the United Nations refugee agency Wednesday, authorities said.

The status will allow Rahaf Mohammed Al-qunun, 18, to apply for asylum in another country, the New York Times reported. She had hoped to travel to Australia where she has friends before she was detained at the Bangkok airport this past weekend and threatened with deportation.

The teenager told officials that she has renounced Islam and feared that her family and relatives would kill her if she returned. She escaped from her family on a flight while they vacationed in Kuwait.

She refused to leave her room during a two-day standoff where she used social media to plea for help, demanding that she meet with U.N. officials. U.N. High Commissioner for Refugee representatives were allowed to process a claim for refugee status.

Local Thai media reported that Al-qunun's father traveled to Bangkok and met with refugee agency officials, but was told that his daughter refused to see him.

Australia's Department of Home Affairs said Wednesday that the United Nations had referred Al-qunun's case to their country for refugee settlement.

"Australian Government should work now with the U.N. refugee agency to offer young Saudi woman Rahaf Alqunun safety in Australia," Hanson-Young wrote on Twitter. "Offering her sanctuary and the chance to live free of discrimination in a country that respects women & girls is the right thing to do."

Australian officials said that they would consider issuing Al-qunun a humanitarian visa if the UNHCR gave her refugee status.

"Pending the outcome of that, if she is found to be a refugee, then we will give very, very, very serious consideration to a humanitarian visa," Australia's Health Minister Greg Hunt said, The Guardian reported.

Elaine Pearson, the Australian director of Human Rights Watch, said that Australia should come to Al-qunun's defense on moral grounds.

"Foreign governments, including Australia, that are concerned about human rights should be doubling down and offering support," Pearson said. "The government has said that promoting women's rights is a priority as part of its foreign policy; well here's a concrete case where they can protect a young woman's life, and the government should be seizing that opportunity and making its views widely known." 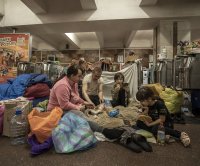 World News // 4 hours ago
Global number of refugees, forcibly displaced people passes 100M
May 23 (UPI) -- The number of global refugees and people forcibly displaced from their homes passed 100 million for the first time amid the war in Ukraine and other conflicts, the United Nation's High Commissioner for Refugees said.

World News // 7 hours ago
5.5-magnitude quake strikes in Japan off coast of 2011 Fukushima disaster site
May 23 (UPI) -- Scientists say that a strong earthquake was recorded off the coast of Japan -- near Fukushima, which was the site of a nuclear accident a decade ago that was triggered by a quake.