The death count was updated from six that was initially reported from the accident, which included five women and three men, Euronews.com reported. The train is believed to have collided with cargo blown off a freight train going the opposite direction on the Storebaelt bridge, which links the Zealand and Funen islands.

There were 131 passengers and three crew on board the train, train operator Deutsche Bahn Cargo Scandinavia reported. The train was heading to Copenhagen.

At the time of the accident, the bridge was closed to vehicle traffic because of strong winds but trains were allowed to pass. The severe storm hampered efforts to rescue people from the train.

The initial investigation by the Danish Accident Investigation Board said that a trailer had blown off a freight wagon onto the oncoming tracks. Emergency personnel transported the injured to a hospital in Odense with non-critical injuries.

"The investigation is underway," Lars Bræmhøj, Chief Police Inspector for Fyn Police said at a press conference on Wednesday. "We still do not know the exact reasons, but we can confirm that some goods fell off a wagon off the freight train, and then the oncoming train hit those goods."

"I was on the second coach when the crash happened," passenger Jim Nielson said who was attempting to catch a flight. "There was a cargo train coming from Zealand, the opposite direction. It was shaking due to the strong wind.

"One of the containers was blown off the cargo train into the rails, because of the wind. Our driver tried to stop the train, pulling the brake. But the train continued to drive a bit, and crashed into the container blown off from the cargo. I saw sparks coming from the wheels," he continued.

World News // 2 hours ago
More countries infected with COVID-19 as WHO warns it has 'pandemic potential'
Feb. 28 (UPI) -- Several countries confirmed their first infections of the deadly coronavirus as the World Health Organization warned countries without a confirmed case of COVID-19 to prepare for its arrival or pay the consequences.

World News // 9 hours ago
Canada to cease security assistance for Prince Harry and Meghan in March
Feb. 27 (UPI) -- The Canadian government said Thursday it will cease assisting in providing security for Prince Harry and his wife, Meghan Markle, when they officially scale back their duties as Duke and Duchess of Sussex on March 31.

World News // 17 hours ago
Project to clear WWII-era bombs in Swiss town could take 20 years
Feb. 27 (UPI) -- Authorities say residents of a small town in Switzerland may have to abandon their homes for more than a decade while safety crews clear away thousands of tons of World War II-era munitions from an underground depot.

World News // 19 hours ago
North Korea postpones school amid coronavirus outbreak
Feb. 27 (UPI) -- North Korea is delaying the opening of schools and kindergartens as the state continues to remain vigilant amid the ongoing outbreak of the new strain of coronavirus in China. 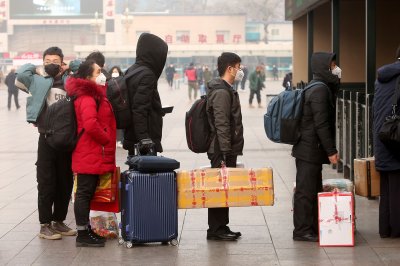