Increased security around the world ready for New Year parties

A girl picks up confetti after it falls from the Hard Rock Cafe marquee as part of the annual New Year's Eve Confetti Test in Times Square in New York City on Saurday. Photo by John Angelillo/UPI | License Photo

Dec. 31 (UPI) -- Plans are being made worldwide for tighter security during New Year's Eve celebrations Monday as millions prepare for 2019.

New York City authorities said there are no credible threats, but they will ratchet up security in Times Square. More than five dozen sanitation trucks and almost 200 police cars will block intersections leading to walking areas, WABC-TV reported.

Streets into Times Square, where more than two million people are expected to celebrate the New Year, were closed at 4 a.m. Monday. Authorities are urging people to take public transportation to the area.

In Chicago, police Supt. Eddie Johnson announced Sunday more officers will be dispatched downtown and into neighborhoods Monday night ahead of celebrations.

"You'll see high visibility, you know, of course in the downtown area," Johnson said, WMAQ-TV reported. "You'll see officers almost on every corner...we want people to be safe, in any part of the city. Especially during the holiday season."

Concerns arose over the weekend when Chicago authorities acknowledged at least three people were beaten Saturday night near a transit station by a gang of about 50.

In France, authorities said nearly 148,000 police officers and troops will be spread throughout the country with the "Yellow Vest" protesters threatening disruptions, Bloomberg reported.

Police plan to create a perimeter around Champs-Elysees in Paris and secure retail centers, public spaces and transport networks. Some demonstrators said they planned on protesting at Champs-Elysees after a televised speech by French President Emmanuel Macron.

"The 2019 New Year celebrations are happening in the context of a still high terror threat and unannounced protests in public spaces," the interior ministry said.

In Turkey, Istanbul police said nearly 40,000 security personnel will be fanned out Monday night and early Tuesday. Horse-mounted officers will be in the city's most crowded areas, officials said.

World News // 17 minutes ago
Lebanese protesters clash with police; death toll climbs to 157
Aug. 7 (UPI) -- Lebanese security forces and protesters clashed in Beirut as demonstrators took to the streets in anger as the death toll from Tuesday's devastating explosion continued to climb.

World News // 10 hours ago
Developing tropical system looms for flood-weary South Korea, Japan
AccuWeather meteorologists are monitoring the opportunity for a new tropical system to form in the West Pacific Ocean that could eventually result in more heavy rain for an already flood-weary portion of Asia.

World News // 19 hours ago
AstraZenica, bio firm agree to produce COVID-19 vaccine for China
Aug. 6 (UPI) -- British drugmaker AstraZeneca said Thursday it has an agreement with a Chinese company to produce 100 million doses of its COVID-19 vaccine, when completed, in China by the end of this year. 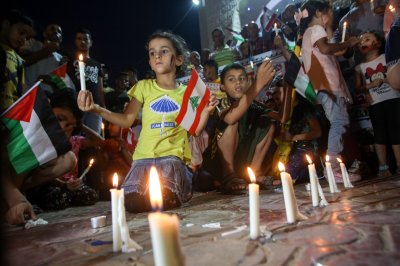