Police in Brazil search for Italian fugitive wanted for murders

Brazilian police have not been able to arrest former leftist activist Cesare Battisti, wanted in Italy to serve a life sentence on murder-related charges. Photo by Fernando Bizerra Jr./ EPA-EFE

"We have some leads but obviously I cannot comment," federal police director Rogerio Galloro said in the G1 report. Battisti is considered a fugitive and will be captured, he added.

Galloro said police didn't try to arrest him before last week, as there was nothing against him in Brazil. In previous years, Battisti was captured three times by police but freed in all cases.

Police have searched the home of a former girlfriend and friends, Folha de Sao Paulo reported

Battisti was sentenced in absentia in the 1980s in a controversial process in Italy for two murders and being an accomplice in another two, but he's never been sent to Italy to face the sentence.

Battisti, who turned 64 on Tuesday, has written several crime novels and says he's innocent of the murder charges. He has lived freely in Brazil.

Bolsonaro said during his campaign he would "immediately" agree to extradite Battisti and met in early November with the Italian ambassador in Brazil, who later said Bolsonaro agreed with Italy on Battisti's case.

Battisti escaped an Italian jail nearly four decades ago while awaiting trial. He has admitted he was a member of a group named Armed Proletarians for Communism, but denies participation in any homicide. 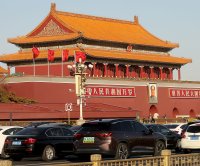 World News // 8 hours ago
Majority in Japan want Tokyo Olympics canceled or postponed, poll shows
April 12 (UPI) -- More than 70% of people in Japan said in a poll they are opposed to holding the Summer Olympics in Tokyo.