Japan raises its defense budget to a record level

A Mitsubishi F-2B fighter plane of the Japan Self-Defense Force. The Japanese government announced a $47 billion defense budget for 2019 on Friday, including the purchase of a considerable amount of U.S.-made planes, helicopters missile systems and other hardware. Photo by Jerry Gunner/Wikipedia Commons

Dec. 21 (UPI) -- Japan's defense budget will grow to $47 billion in fiscal 2019, the government announced on Friday, in a bid to counter defense buildups by China and North Korea.

Japanese Prime Minister Shinzo Abe's cabinet approved the defense increase in the national budget for the year starting in April. The growth in defense spending, for the fifth consecutive year, comes as Japan already has the seventh-largest defense budget in the world.

The funding will include the purchase of the Lockheed Martin's Aegis Ashore land-based missile interceptor system, defense officials said. The system is intended to shield Japan from a possible missile attack from North Korea. The budget also covers the cost of six F-35A stealth jets, nine Northrup Grumman E-2D Advanced Hawkeye early-warning aircraft, and the start of construction of Japan's first aircraft carriers since World War II. A five-year plan, through 2024, envisions the additional purchase of 105 U.S.-made F-35 fighter planes, as well as investments in cyberwarfare capabilities and defense-related space technology. Japan intends to spend $242 billion on defense in the next five years.

In a defense capability assessment released earlier this week, the government said that Japan faces a changing balance of power in Asia. It noted China's challenge of Japanese-administered islands in the East China Sea, and North Korea's advancement in nuclear weapons and missiles. It also expressed concern over a buildup of Russian troops in its eastern territory.

The buildup is controversial in Japan, with some critics concerned that the country is turning away from its commitment to only defensive military capabilities, as outlined in its post-World War II constitution. Increasing reliance on U.S.-made equipment has also raised concerns over Japan's internal defense industry as well, although in many cases there is no alternative to U.S. hardware. 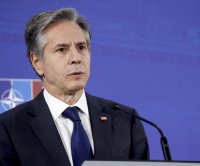