Fighting for Yemen port city rages on ahead of cease-fire

Supporters of the Houthi rebel movement perform traditional dances during a gathering to show support to the Houthi rebels, in Sana'a, Yemen, Thursday. Photo by Yahya Arhab/EPA-EFE

Dec. 17 (UPI) -- Both sides in the protracted Yemeni civil war have continued to fight for the critical port city of Hudaydah before a negotiated ceasefire that was negotiated takes effect Tuesday.

Forces supporting the Yemen government and the opposing Houthi rebels have blamed the other for the continued fighting ahead of the break. Rebel-supported news outlets charged that the Saudi-led government coalition bombed areas more than 50 times in seven airstrikes Sunday and ran 12 strikes on Saturday, CNN reported.

Meanwhile, Yemeni government information minister Moammar Al-Eryani said that the coalition has been defending itself against various attacks by Houthi rebels.

Hudaydah and its Red Sea port is a critical juncture in Yemen, needed to get humanitarian supplies throughout the war-torn country. The cease-fire negotiated Thursday is an attempt to get those supplies flowing again.

Both sides have been participating in peace talks in Sweden for more than a week in hopes to end the four-year war that has killed thousands with millions now facing starvation.

"A robust and competent monitoring regime is not just essential, it is also urgently needed and both parties have told us they would very much welcome it and indeed depend on it," Griffiths said. 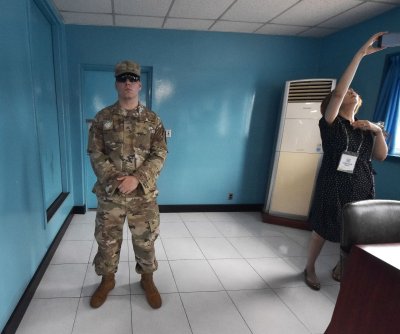 World News // 15 hours ago
Polish protesters block roads, storm churches over abortion ban
Oct. 26 (UPI) -- Protesters blocked roads and stormed churches in Poland in response to a top court ruling that would ban abortions in instances where a fetus is diagnosed with a serious irreversible birth defect.