Members of the Turkish-backed Free Syrian Army ride in a caravan in the city of Azez, near the Syria-Turkey border on January 19. File Photo by Hasan Kirmizitas/EPA-EFE

Dec. 12 (UPI) -- Turkish President Recep Tayyip Erdogan said Wednesday his military will soon launch a military operation against terror groups in Syria it says are backed by the United States.

Turkey has for years criticized the United States' support for the groups and said it's grown increasingly concerned about observation posts along Syria's border with Turkey.

"It is clear that the purpose of these U.S. observation posts is not to protect our country from terrorists but to protect terrorists from Turkey," Erdogan said. "These are branches of the PKK. The evidence is clear. Why are you working with them instead of with us?"

Erdogan said he doesn't want disagreements about Syria to damage the country's relationship with the United States in the future.

The two sides have been fighting since 2011, which is when Assad began cracking down on protesters.

As the war continued, millions of Syrian refugees left the country -- many ending up in Turkey, Lebanon, Egypt and Iraq. The United Nations refugee agency, though, said in a report this week as many as 250,000 of the refugees could return to Syria next year.

"As the situation in Syria improves, some of these refugees are making the journey home," said Amin Awad, director for the Middle East and North Africa's Office of the U.N. High Commissioner for Refugees.

World News // 1 hour ago
Stowaway survives 11-hour plane ride from Africa to Amsterdam
Jan. 24 (UPI) -- A stowaway from South Africa spent 11 hours in the nose wheel of a cargo plane that landed in Amsterdam.

World News // 3 hours ago
Man who stabbed woman dead in London is run over by car and killed
Jan. 24 (UPI) -- A man believed to have killed a woman by stabbing her to death on a road in west London also died after he was run over by a car on Monday, police said. 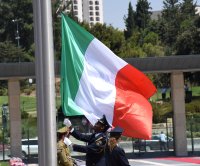