South Korean President Moon Jae-in (L) and U.S. President Donald Trump shake hands before the start of their bilateral summit on the sidelines of the Group of 20 Leaders' Summit in Buenos Aires on Friday. File Photo by Yonhap

Dec. 3 (UPI) -- South Korean President Moon Jae-in suggested Kim Jong Un could visit Seoul before the end of the year -- the first official statement about plans for engagement after weeks of speculation the North Korean leader would travel to the South for his next summit.

Moon, who was en route to New Zealand after the annual G20 summit in Argentina, told reporters the Kim visit would send a "message about peace" to the international community, South Korean television network JTBC reported Monday.

Moon told the press U.S. President Donald Trump said he "thinks of Chairman Kim Jong Un in friendly terms, and [asked me] to convey a message to Chairman Kim, that he will do what Kim wants."

The South Korean president also said all concerns about the timing of the Seoul summit and its occurrence before the next Trump-Kim summit has dissipated.

Moon's South Korean presidential adviser Moon Chung-in told Yonhap on Monday there is still a possibility a peace declaration could be signed between Washington and Pyongyang.

Moon, whose email account may have been recently hacked, also said if the U.S.-North Korea summit is held in January or February, Moon Jae-in could join them to co-sign the peace declaration.

"The best scenario is that Chairman Kim and U.S. President Donald Trump meet first," the presidential adviser said. "This would bring [North-South relations] into a virtuous circle."

Moon also said that is "currently not the case."

The potential Seoul summit is an opportunity to discuss the next U.S.-North Korea summit, he added.

World News // 6 hours ago
Japan open to deploying soldiers to Senkaku Islands, report says
March 8 (UPI) -- Japan may not be ruling out troop deployment to the disputed Senkaku Islands if conflict arises with rival forces, according to a recent press report.

World News // 7 hours ago
Report: Chinese military bases near Taiwan show new renovations
March 8 (UPI) -- China could be increasing its military presence near Taiwan, according to a recent press report. 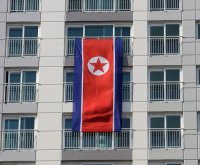 World News // 7 hours ago
Myanmar military occupies hospitals, other buildings amid protests
March 8 (UPI) -- Soldiers in Myanmar are now occupying hospitals, universities and temple compounds nationwide as the military junta consolidates control of the country in the face of public opposition to the Feb. 1 coup.

World News // 9 hours ago
South Korea's ex-prosecutor climbs in presidential poll after resignation
March 8 (UPI) -- A former South Korean prosecutor who abruptly resigned last week is soaring in a local poll ahead of a presidential election in 2022.