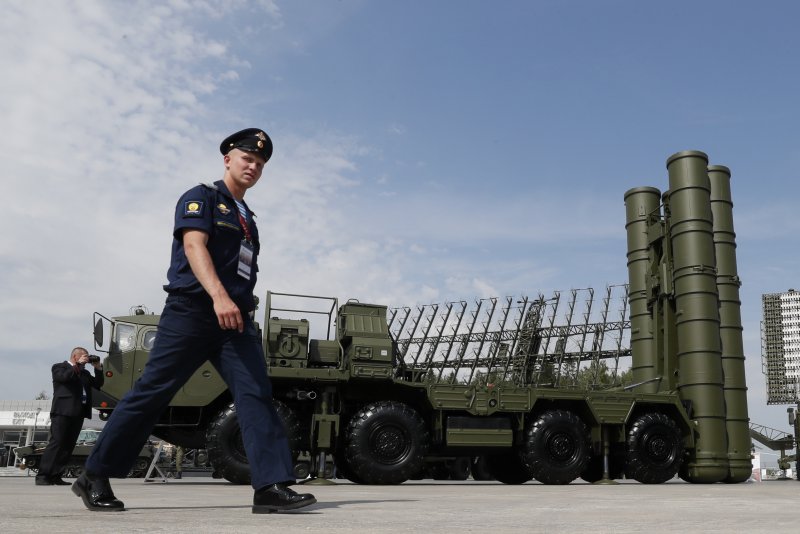 Russia deployed S-400 missile systems on the Crimean peninsula in the wake of the latest crisis with Ukraine. Photo by Yuri Kochetkov/EPA/EFE

Nov. 28 (UPI) -- Tensions are escalating in the latest dispute between Russia and Ukraine.

"It's a provocation initiated by the current authorities, and I think by the [Ukrainian] president, in light of the upcoming elections to be held next year ... The incident in the Black Sea happened, it is a border incident, no more," Putin said at a Moscow business forum, according to CNBC.

Putin went on to say that Poroshenko hopes the crisis will boost his popularity before Ukraine's March election.

Ukraine called it an "act of aggression" by Russia.

Poroshenko warned Putin that if Russia attacks Ukraine, it would pay a "huge price."

Russia is sending new S-400 missile systems to Crimea in response to the increasing threat. The new missile systems, called "Triumf" in Russian, are capable of shooting down aircraft and ballistic missiles from 250 miles away. Three divisions are already in place.

Russia's state-run media said a fourth S-400 missile system will be in place by the end of the year.

Analysis by international think tank Chatham House said Putin hopes to undermine the Ukrainian economy to hurt Poroshenko's chances at reelection, according to a Bloomberg report. A Ukrainian revolution overthrew the Kremlin-backed leader in 2014.

"The situation is affecting local economies along the coast and destabilizing the Ukrainian ports of Mariupol and berdyansk," Chatham House research fellow Mathieu Boulegue said.

Russia faces its own sanctions for annexing the Crimea, also in 2014.

World News // 9 minutes ago
Partygate: Gray report slams British PM Boris Johnson, others for breaking COVID-19 rules
May 25 (UPI) -- A damning report was released Wednesday that said British Prime Minister Boris Johnson and other officials violated COVID-19 restrictions in 2020 and 2021 by having social gatherings in a scandal known as "partygate."

World News // 17 hours ago
Dutch airline KLM faces suit over 'greenwashing'
May 24 (UPI) -- Environmental groups have filed suit against KLM, alleging the Dutch airline has falsely claimed to be environmentally sustainable in advertising to improve its image, which is greenwashing.

World News // 21 hours ago
Band of gunmen attack hotel, 2 bars in central Mexico; 11 killed
May 24 (UPI) -- Mexican police are searching for a group of gunmen who opened fire on a hotel and two bars late Monday, killing nearly a dozen people.

World News // 22 hours ago
Hong Kong cardinal denies failing to register fund that helped dissidents
May 24 (UPI) -- Cardinal Joseph Zen of Hong Kong, along with five other people, denied charges in court on Tuesday that they failed to register a relief fund that was assisting protestors who faced legal and medical fees.
Advertisement