A chemical explosion in China that killed at least 23 people on Wednesday destroyed trucks and other vehicles near the Hebei Shenghua Chemical Industry Co. plant. File Photo by Stephen Shaver/UPI | License Photo

Nov. 28 (UPI) -- A deadly explosion in China's Hebei Province has killed 23 people and injured 22 others at a factory zone.

The blast took place near a chemical plant in Zhangjiakou at about 1 a.m. Wednesday, the Beijing News reported.

The death toll began to climb after rescuers descended on the site. The first reports stated six had died, but later in the day Zhangjiakou officials said the death toll had reached 22. By late afternoon another corpse was recovered near the Hebei Shenghua Chemical Industry Co. plant, The New York Times reported.

Most of the victims may have been truck drivers, who were sleeping in their vehicles or waiting to unload their deliveries in the heavily industrialized zone in northern China.

Their vehicles were destroyed beyond recognition. Footage of the disaster scene shows charred trucks and burnt smaller vehicles.

State-owned Xinhua news agency reported the explosion occurred when a truck was delivering acetylene to an energy technology factory. Officials at Zhangjiakou said the cause remains unclear, however.

Witnesses said they could hear the explosion from more than a mile way, according to local Chinese news reports.

Footage of the aftermath showed smoke billows against a dark sky.

China has been taking measures against industrial accidents since 2015, when a series of explosions in the city of Tianjin killed 165 people.

Investigators at the time pointed out lax regulation and low management standards were responsible for the deadly blast.

World News // 10 hours ago
Russian authorities arrest 5 in connection with deadly coal mine disaster
Nov. 27 (UPI) -- Authorities have arrested five people on charges related to negligence in a Russian coal mine disaster that left more than 50 people dead. 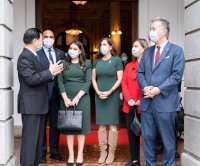