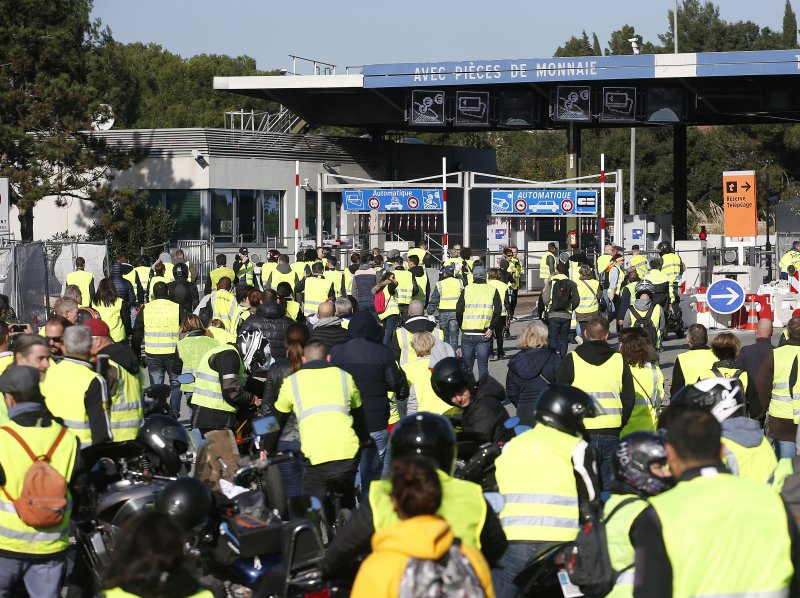 People wearing yellow vests gather in Antibes, southern France, as they try to block roads and cause traffic chaos as part of a nationwide protest against fuel taxes. One female protester was killed when she was run over by a car in Pont-de-Beauvoisin, in the southeastern Savoie region. Photo by Sebastien Nogier/EPA

Nov. 17 (UPI) -- A female French protester was run over by a car and died during a rally against rising fuel prices Saturday, an official said.

In Pont-de-Beauvoisin in the southeastern Savoie region, a female driver was taking one of her children to the doctor when she was stopped by demonstrators wearing yellow vests around 8 a.m., Louis Laugier, the local prefect said at a news conference. After talking to them, she tried to move on a side road and protesters banged on her car.

"It appears the woman panicked, accelerated and ran over a person who later died," Laugier said.

The 63-year-old woman pedestrian was killed and the driver was arrested.

"That's the reason why we were worried to have people not experienced organizing protests," French Interior Minister Christophe Castaner said.

Besides the fatality, another 106 people have been injured and 38 have been placed in custody, the Interior Ministry said in a statement.

RELATED European countries call for stronger action against deforestation by '20

More than 1 million people were expected to protest in the grassroots movement called gilets jaunes, named after the neon yellow vests French motorists must keep in their vehicles, formed after President Emmanuel Macron raised fuel taxes.

"Honestly we're satisfied, even if it's true we are not hundreds of thousands people here, but still, people have come," Thierry Paul Valette, who helped organize a protest on the Champs Elysées in Paris, told CNN. "We can't stand Macron's taxes any more, it's too much. We couldn't make ourselves heard through political parties or trade unions, so we had to do something."

On the Champs-Élysées in Paris, protesters chanted "Macron resign" while they walked slowly back and forth over pedestrian crossings.

The government said the taxes are intended to reduce the country's reliance on fossil fuels. Financial incentives are aimed to persuade motorists to swap older, polluting vehicles for newer, cleaner models.

Brent crude oil, the benchmark for worldwide oil purchases, increased by more than 20 percent in the first half of 2018 to a peak of $86.07 in early October.

World News // 6 hours ago
Biden says 'everybody' should be concerned about monkeypox cases
May 22 (UPI) -- President Joe Biden said Sunday that "everybody" should be alert to the recent outbreak of monkeypox cases in the United States and Europe and stay on top of developments.

World News // 2 hours ago
Former PM Imran Khan calls for protests in Pakistan
May 22 (UPI) -- Ousted Pakistani Prime Minister Imran Khan on Sunday called for his supporters to march on the country's capital of Islamabad on Wednesday to conduct a massive sit-in to force the government to halt new elections.

World News // 4 hours ago
Russia bans 963 Americans from country, including Biden, late John McCain
May 22 (UPI) -- Russia has banned President Joe Biden and Vice President Kamala Harris along with 961 other Americans from entering the country.

World News // 6 hours ago
Zelensky: Russian offensive in Severodonetsk pushed back by Ukrainian forces
May 22 (UPI) -- The Russian military continued their attack on the key eastern Ukraine city of Severodonetsk on Sunday, but Ukrainian President Volodymyr Zelensky said they were eventually pushed back after fierce fighting.

World News // 21 hours ago
Tornado touches down in German city, 43 injuries reported
May 21 (UPI) -- Police in Germany said 43 people were injured by a tornado that swept through a city amid a severe thunderstorm.