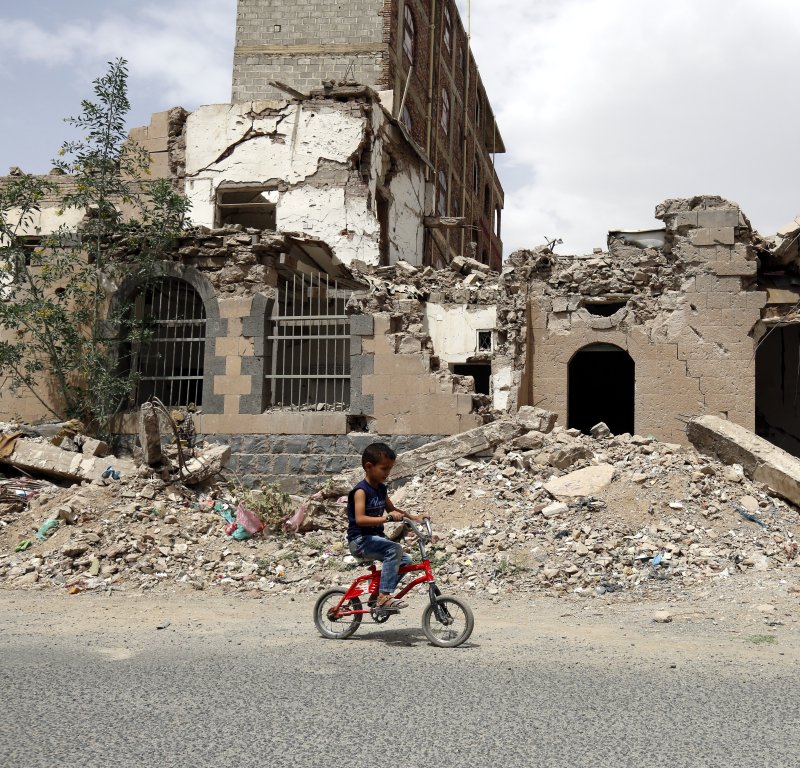 A Yemeni child rides a bicycle past the remains of a destroyed building in Sana'a, Yemen, on June 27. File Photo by Yahya Arhab/EPA-EFE

The U.N. International Children's Emergency Fund, UNICEF, said the fighting has placed 59 children in danger. Nearly half are in the hospital's intensive care unit.

"Intense fighting ... is now dangerously close to Al Thawra hospital, putting the lives of 59 children ... at imminent risk of death," UNICEF executive director Henrietta Fore said in a statement. "Medical staff and patients in the hospital have confirmed hearing heavy bombing and gunfire. Access to and from the hospital, the only functioning one in the area, is now imperiled."

Fore said 40 percent of Yemen's 400,000 malnourished children are in Hudaydah or surrounding areas. She said some of the sickest are being treated at the hospital.

"Children, in particular, cannot afford for Al Thawra to be caught up in the fighting," Fore said, adding that fighting has intensified in the city, where up to 80 percent of humanitarian aid is delivered.

"The toll in lives could be catastrophic if the port is damaged, destroyed or blocked," she said.

Fore said UNICEF will continue to deliver supplies to the danger zone.

"UNICEF calls on all parties to cease hostilities near and around the hospital, and to ensure that civilians can safely access the hospital."

Fighting for the port city has escalated in recent weeks, and the United Nations predicted the crisis could turn into a historic famine. A Saudi Arabia-led coalition supported by the United States has continued bombing Houthi rebel targets in the country.

Warplanes have also targeted the capital Sana'a and northern provinces. The coalition is fighting in Hudaydah to win back control from the Houthis.

World News // 1 hour ago
Sewage released near dozens of beaches in Britain after heavy rains
Aug. 17 (UPI) -- A British charity has issued pollution warnings for more than 40 beaches along the southern portion of the country due to heavy sewage discharges that were caused by heavy rains.

World News // 4 hours ago
Young boy surprises Pope Francis during speech calling for youth-elderly 'alliance'
Aug. 17 (UPI) -- Pope Francis in his weekly General Audience on Wednesday called for stronger ties with young people and the elderly, adding that such an alliance is a key to humanity's future.

World News // 4 hours ago
Greece rescues Syrian migrants from a river islet after child killed by scorpion
Aug. 17 (UPI) -- Greece has taken a group of marooned Syrians off a scorpion- and snake-infested river islet following the scorpion-sting death of a 5-year-old child in that group. The Syrians have been moved to temporary housing.

World News // 5 hours ago
Syria rejects Biden's accusation that it abducted journalist Austin Tice in 2012
Aug. 17 (UPI) -- The Syrian government on Wednesday rejected U.S. accusations that it is detaining an American journalist who's been missing for a decade, or any other American citizens.

World News // 7 hours ago
Fire near London Bridge train station forces evacuations
Aug. 17 (UPI) -- A fire under the railway arches at London's Union Street near the London Bridge forced the line to be shut down and passengers evacuated Wednesday morning.
Advertisement