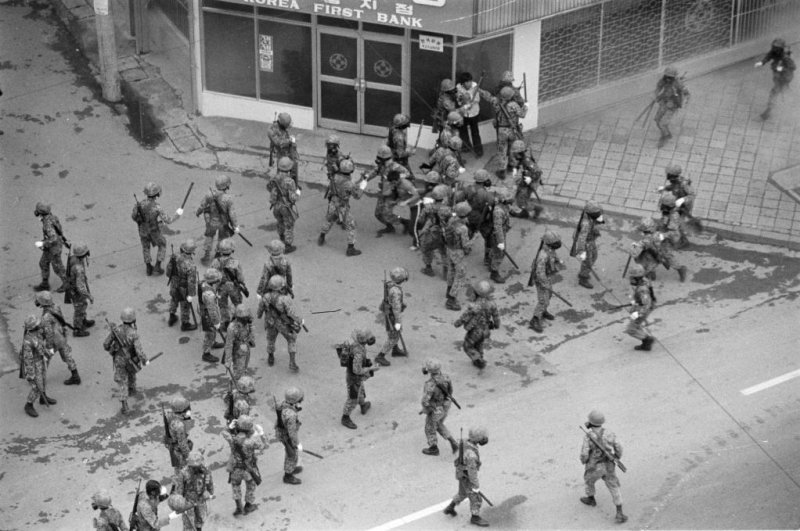 In this photo taken by then Yonhap News Agency photojournalist Na Kyung-taek and released on May 14, 2015 by the May 18 Memorial Foundation, soldiers beat a citizen in the martial law-gripped city of Gwangju, southwestern South Korea, during protests against the then military junta of Gen. Chun Doo-hwan in May 1980. Photo by Na Kyung-taek /EPA

SEOUL, Oct. 31 (UPI) -- South Korean female survivors of the pro-democracy movement in 1980 said that soldiers sexually assaulted them during their brutal crackdown on protesters, according to a government probe on Wednesday.

The joint government investigation confirmed a total of 17 cases of sexual violence during the May 18 Democratic Uprising in the southern city of Gwangju in 1980.

A mass protest took place in Gwangju against the authoritarian government under former President Chun Doo-hwan, who took power in a military coup.

The military crackdown killed more than 160 civilians and injured some 800 people, according to the May 18 Memorial Foundation, a non-profit foundation dedicated to the pro-democracy movement. Activists said more people were killed by the military crackdown under Chun's order.

Women victims said they were raped by two or more soldiers in uniform while they were threatened with guns. The probe found that victims include not only female protesters but also students and pregnant women.

The victims testified in interviews with the state probe team that they have been suffering from psychological trauma for 38 years and some have kept it a secret even from their family.

The probe found that most of the sexual assaults occurred in the early phase of the democracy movement between May 19-21, 1980. It also found 45 more cases of human rights abuses against women. Women protesters were sexually harassed while being held in prions or during investigations.

"The probe holds a historic meaning as it first investigates human rights abuse against women during the pro-democracy protests," said Lee Suk-jin, vice minister of the Ministry of Gender Equality and Family, which conducted the probe with the National Human Rights Commission of Korea and the Defense Ministry from June to October.

The ministry said it will help the victims receive psychological counseling for secondary damage from the interviews.

World News // 10 minutes ago
Former Pakistani PM leads march into Islamabad demanding new elections
May 25 (UPI) -- Former Pakistani Prime Minister Imran Khan followed through with his march to the capital of Islamabad Wednesday, leading to a crackdown on crowds by police and military.

World News // 7 hours ago
Partygate: Gray report slams British PM Boris Johnson, others for breaking COVID-19 rules
May 25 (UPI) -- A damning report was released Wednesday that said British Prime Minister Boris Johnson and other officials violated COVID-19 restrictions in 2020 and 2021 by having social gatherings in a scandal known as "partygate."

World News // 1 day ago
Dutch airline KLM faces suit over 'greenwashing'
May 24 (UPI) -- Environmental groups have filed suit against KLM, alleging the Dutch airline has falsely claimed to be environmentally sustainable in advertising to improve its image, which is greenwashing.