Filipino motorists wade on a flooded road in the typhoon-hit town of Casiguran, Aurora province, Philippines, on Tuesday. Photo by Nel Maribojoc?EPA

Oct. 30 (UPI) -- Typhoon Yutu weakened as it hit the Philippines Tuesday, but forecasters said it will probably re-strengthen as it heads toward the Chinese mainland.

Yutu, once the equivalent of a Category 5 hurricane, dissipated into a tropical storm over the Philippines early Tuesday. It dumped 6 inches of rain over northern and eastern Luzon. Typhoon-strength winds battered homes and damaged crops as it surged through the island nation.

Manila, on the western coast of southern Luzon, sustained gusty winds and rain Tuesday morning, but was largely spared from the typhoon's most severe weather.

Taiwan News reported the typhoon landed on Luzon with Category 1-strength winds of 84 miles per hour. The storm was traveling at 11 mph and recorded gusts of 107 mph. The storm was located Tuesday 400 miles southeast of Taiwan.

AccuWeather reported the storm is expected to turn north, putting eastern China and Taiwan in its path the rest of the week. It will bring heavy rain and possibly major floods and mudslides from Wednesday to Friday.

Forecasters say Yutu will likely face unfriendly atmospheric conditions, causing it to weaken as it moves closer to China and Taiwan. It is still possible, though, the storm won't make landfall anywhere else.

Last week, Yutu grew to the equivalent of a Category 5 hurricane and hit the United States' Northern Mariana Islands -- killing one person and causing widespread damage. President Donald Trump on Saturday declared a major disaster there.

Thousands of residents went without electricity and water for days. 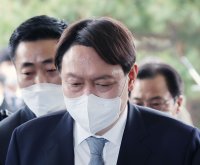