The court ruled Khaleda and three conspirators abused their powers by raising charitable funds and using them for their own benefit.

In addition to the "rigorous imprisonment," Khaleda will be fined and must give up land purchased through her Zia Charitable Trust.

The punishment is the highest the court can give.

Khaleda, 72, is the chairwoman of the opposition Bangladesh Nationalist Party.

Khaleda has been in jail since February for embezzling funds for an orphanage. The court Monday handed down the sentence after an appeal by Khaleda for dismissal was rejected by the Bangladeshi Supreme Court.

Khaleda wasn't present in court Monday because of an illness.

World News // 3 hours ago
Biden, NATO to tackle full plate of issues at summit
June 14 (UPI) -- President Joe Biden, participating in his first NATO summit as president, is expected to reaffirm the United States' commitment to the alliance Monday ahead of his meeting with Russian President Vladimir Putin. 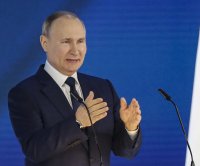