Damages done Thursday by a man who smashed the glass case protecting the Magna Carta in England's Salisbury Cathedral. The 45-year-old was arrested on suspicion of attempted theft and later released on bail. Photo by Wiltshire Police/EPA-EFE

Oct. 27 (UPI) -- A man was arrested Thursday on suspicion of attempted theft after smashing the glass case of the Magna Carta at England's Salisbury Cathedral.

The Salisbury Cathedral was evacuated after the incident, which police said was carried out by a 45-year-old who was later released on bail. Other charges the man faces include possession of an offensive weapon and criminal damage.

After smashing the case, an American tourist from Louisiana held the man to the ground until police arrived.

The Magna Carta at the Salisbury Cathedral is one of four remaining copies of the historic document, signed in 1215 by Britain's King John to address grievances barons had with the king. The documented granted free men the right to a fair trial and limited taxation without representation.

The Magna Carta was not damaged and no injuries were reported as a result of the incident.

A spokesman for Salisbury Cathedral said the document was removed from the display case for a limited time.

"We are very sorry that, for the time being, our copy of Magna Carta will not be available to visitors and will have it back on display as soon as we can," the spokesman said. "We are very relieved that no one was hurt during the incident and that the Magna Carta itself is undamaged. We are very grateful to all who dealt with the situation so swiftly and effectively."

World News // 8 hours ago
Royal Jordanian Airlines to resume service to Syria after 9 years
Sept. 28 (UPI) -- Jordan's national airline made the announcement on Tuesday that it would fly to Syria starting Oct. 3. 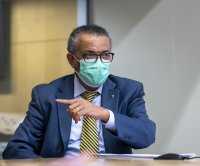 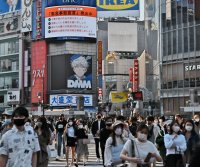 World News // 12 hours ago
Japan to end all COVID-19 states of emergency nationwide this week
Sept. 28 (UPI) -- Later this week, Japan will emerge from a persistent state of COVID-19 emergency for the first time in six months, government officials in Tokyo said Tuesday.

World News // 13 hours ago
Activist Greta Thunberg on politicians' climate promises: 'Blah, blah, blah'
Sept. 28 (UPI) -- Ahead of a major climate summit in a few weeks, activist Greta Thunberg again ramped up pressure on global leaders at an environmental rally in Italy Tuesday -- saying that they have been all talk and no action.
Advertisement