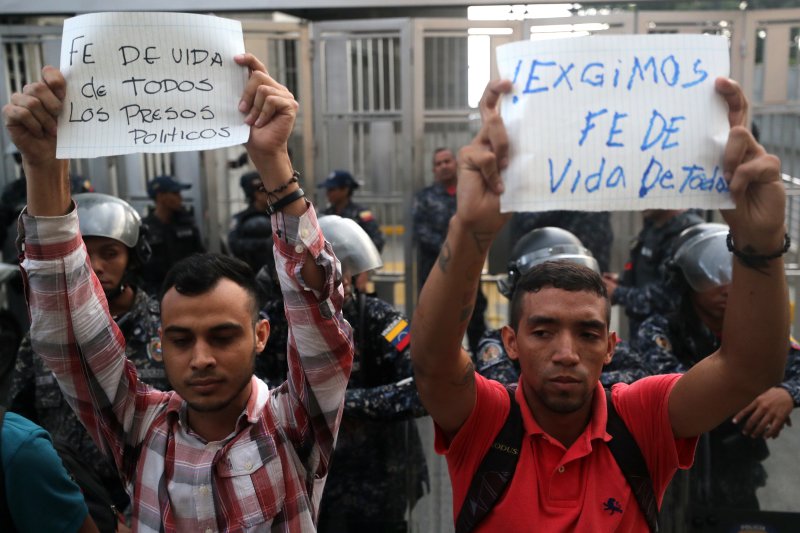 Supporters of imprisoned Venezuelan opponents hold signs that read 'Proof of life of all political prisoners' (L) and 'We demand proof of life from all' (R) during a protest on Oct. 8, 2018. Photo by EPA-EFE/Miguel Gutiérrez

Oct. 25 (UPI) -- Venezuelan opposition activist Maria Corina Machado on Thursday blamed government forces for an attack on her and her supporters during a political event this week.

Potentially marking the latest incident involving aggression against Venezuela's political opposition, a mob allegedly attacked her and a group of 20 members of her political organization, and stole some belongings. They were sent by President Nicolas Maduro's government as intimidation, she said. She intended to continue later Thursday to other planned campaign events.

"Maduro is responsible, just like he is also responsible for massacres taking place in the south of Bolivar and of which nobody wants to talk about, about the military killings in the border with Colombia (...) and of the deaths due to misery, malaria and hunger that they also do not want people to talk about," she said in footage published by VPtitv .

"We are here to talk about it, so that the world knows what is happening in Venezuela," she said in an interview with VPItv.

Earlier this month the Organization of American States, the United Nations' committee on human rights and the European Union expressed concerns over the death of a Venezuelan opposition leader, Fernando Alban, while he was in police custody.

The government said he killed himself as he jumped from the tenth floor of the police headquarters in the Venezuelan capital.

Maduro has countered claims his government is quashing opposition by saying his government is the victim of attacks coordinated by the Venezuelan "oligarchy" and the "ultraright," including an alleged attempt on his life in August.

About 1.9 million people have left Venezuela since 2015, escaping social upheaval as well as political and economic problems. Most have migrated to nearby countries, according to an early October report by the United Nations.

As this occurs, the Venezuelan opposition has lost the unity it had previously worked to achieve, Spanish newspaper El Pais reported. This month, the coalition of opposition forces created a decade ago to oppose the government of former President Hugo Chavez was dissolved over political differences among its members.

Machado's party, Vente Venezuela, was the first group to leave the coalition in 2016. Her party holds the strongest stance against Maduro, Chavez's former vice president who took over the presidency after his death in 2013, El Pais added.

"We want nothing to do with false dialogue just to keep people quiet and calmed. Zero appeasement. Disobedience," she said.

World News // 9 hours ago
Korean firms chalk up record profits amid COVID-19
SEOUL, May 7 (UPI) -- COVID-19 may have had a devastating impact on the global economy, but some South Korean companies racked up outstanding earnings during the first quarter of 2021.

World News // 12 hours ago
U.N. alarmed by Brazil drug raid that killed at least 25 in Rio
May 7 (UPI) -- The United Nations Human Rights Office called for an investigation Friday into a Brazilian police operation that led to the deaths of at least 25 people, including a police officer.