Oct. 16 (UPI) -- Chinese stock markets fell to a four-year low on Tuesday as concerns of an economic slowdown are growing amid an ongoing trade dispute with the United States.

China's benchmark Shanghai Composite Index fell 0.85 percent to close at 2,546.33, the lowest level since November 2014, according to reports.

The index is down 29 percent from its peak in February.

Stock markets initially rose on expectations the U.S. Treasury would not designate China as a currency manipulator, and that Chinese agencies, including the state-owned Assets Supervision and Administration Commission of the State Council, have become the largest shareholders of some private sector companies as part of an economic stimulus package.

But concerns remain over a slowdown in the world's second-largest economy, including escalating consumer prices that could hurt growth.

China's September consumer price index rose 2.5 percent year-to-year, surpassing 2 percent for the third consecutive month. The CPI had grown at a rate of 1 percent year-on-year as recently as April.

On Tuesday Beijing's foreign ministry called on the United States to pursue ties on the "basis of mutual respect and cooperation without conflicts," referring to the escalating tariff war that have created new obstacles for producers in both countries.

Amid the trade dispute China is taking extra steps to show it is easing market access for foreign investors.

Beijing said Tuesday it has created an "unprecedented" free trade zone in the island province of Hainan in the south that will, according to state newspaper Global Times, "transform the island into a global free trade hub comparable to Hong Kong and Singapore."

"Establishing an FTZ that covers an entire province is unprecedented in China," a Chinese government official said.

World News // 10 hours ago
U.S. Embassy in Kyiv reopens with flag-raising
May 18 (UPI) -- Secretary of State Antony Blinken announced Wednesday that the U.S. Embassy in Ukraine's capital, Kyiv, has reopened for the first time since Russia invaded Ukraine three months ago.

World News // 14 hours ago
French government to appeal city's move to allow burqinis at public pools
May 18 (UPI) -- One day after lawmakers in Grenoble, France voted to allow Muslim women to wear burqini swimsuits at state-run swimming pools, the French government said Wednesday it will appeal the decision.

World News // 16 hours ago
British MP out on bail after rape, sexual assault allegation
May 18 (UPI) -- An unnamed British Parliament member accused of rape has been released on bail, Metropolitan Police confirmed Wednesday. 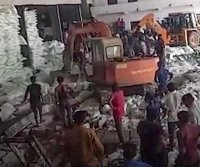 World News // 16 hours ago
At least 12 dead, several hurt after wall collapses at India salt factory
May 18 (UPI) -- A wall collapsed at a salt factory in western India on Wednesday, killing at least a dozen workers there and injuring several others, officials said.

World News // 18 hours ago
Russian soldier enters guilty plea in Ukrainian war crime trial
May 18 (UPI) -- A 21-year-old Russian soldier faces life in prison after he entered a guilty plea to killing an unarmed civilian during Russia's invasion of the country in the first war crimes trial of the war.

World News // 19 hours ago
U.N. global climate report shows severe impact on food security
May 18 (UPI) -- Climate change continued to heat up the Earth in 2021 as concentrations of greenhouse gases increased, sea ice mass shrank and ocean levels rose, according to a new report from the World Meteorological Organization.
Advertisement