Oct. 9 (UPI) -- Turkey's foreign ministry said Tuesday it would search the Saudi consulate in Istanbul for a Saudi journalist who disappeared after entering it last week.

Jamal Khashoggi, 59, a Saudi journalist and contributor to The Washington Post who has been living in the United States since last year, fearing arrest for writing criticisms of Saudi leadership, has been missing since he entered the Saudi consulate in Istanbul last Tuesday.

His fiancee, Hatice Cengiz, and other people who know him have not seen or heard from him since.

Cengiz said he first went to the consulate on Sept. 28 to obtain a document related to their upcoming wedding and he returned Tuesday with concern he wouldn't be allowed to leave.

Turkish spokesman Hami Aksoy said in a statement that authorities were "open to cooperation" and willing to examine the consulate grounds, though it was not clear when the search would take place.

Two people with knowledge of a Turkish probe into Khashoggi's disappearance told The Washington Post Turkish investigators believe a 15-member team from Saudi Arabia killed him in the consulate.

Prince Khalid bin Salman, the Saudi ambassador to Washington, said the reports the kingdom had detained or killed Khashoggi were "absolutely false and baseless."

"An independent international investigation must immediately be launched into the events. Those responsible - perpetrators and masterminds - should be identified and brought to justice. We call on the Saudi and Turkish authorities to cooperate fully to resolve this case," the statement continued.

RELATED U.S. consulate in Iraq shuts down over Iran-linked threat

"We are concerned that the disappearance of Mr. Khashoggi is directly linked to his criticism of Saudi policies in recent years," the experts said. "We reiterate our repeated calls on the Saudi authorities to open the space for the exercise of fundamental rights, including the right to life and of expression and dissent."

A day earlier, leaders across the world weighed in on Khashoggi's disappearance.

"Do you not have cameras and everything of the sort?" Erdogan said of the consular officials at a news conference in Hungary. "They have all of them. Then why do you not prove this? You need to prove it."

"I don't like hearing about it," Trump said. "Hopefully that will sort itself out. Right now, nobody knows anything about it, but there's some pretty bad stories going around. I do not like it." 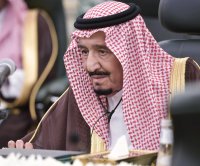