Kim Jong Un has followed up on a recommendation from South Korean President Moon Jae-in to invite Pope Francis to Pyongyang, according to a South Korean press report. File Photo by KCNA/UPI | License Photo

Oct. 9 (UPI) -- Kim Jong Un has invited Pope Francis to Pyongyang, and has said he would "warmly welcome" him to North Korea in what would be a historic visit to the country by the head of the Roman Catholic Church.

The North Korean leader may have taken a recommendation from South Korean President Moon Jae-in to extend an invitation to the pope, following the most recent inter-Korea summit in Pyongyang, South Korean newspaper Hankyoreh reported Tuesday.

Kim's willingness to host Francis could be a sign North Korea is ready to take unprecedented steps to joining the international community.

"President Moon had said the Pyongyang summit must receive the support of the international community, and suggested [inviting the pope] would be one way" of earning trust, a South Korean presidential Blue House source told Hankyoreh.

Pope Francis has previously vocalized his support for inter-Korea détente and the easing of tensions on the peninsula.

"I support the courageous decisions of the North and South Korean leaders," the pope said following the first summit in Panmunjom in April.

South Korean Archbishop Kim Hee-jung of Gwangju, who accompanied Moon to the last summit, said the North Korean leader asked him in September to deliver a message to Pope Francis -- to work toward reconciliation on the peninsula.

The South Korean cleric also said Kim Jong Un "bowed" after he said he would deliver the message to the Vatican.

Since the summit, the archbishop said he has met with Francis.

The pope has yet to respond to Kim's invitation.

South Korean diplomats at the Vatican said it is difficult to predict whether Francis will accept the chance to go to Pyongyang, Yonhap reported Tuesday.

The pope has previously brokered agreements between the United States and Cuba and urged Colombians to push for peace in 2017.

World News // 8 hours ago
France says it will defend Sweden, Finland against attacks as they seek NATO membership
May 16 (UPI) -- France will defend Sweden and Finland, Elysee said Monday, as the two Nordic countries have received threats from Russia over their decisions to join the NATO defensive military alliance. 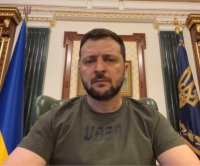