SEOUL, Oct. 2 (UPI) -- South Korea has released a Russian vessel, which had been detained at a South Korean port for more than a month, after completing an investigation on the sanctioned ship by the U.S.

"The government has deferred departure of the ship during its investigation related to the North Korea-related designations by the U.S. on Aug 21. Following completion of necessary steps taken, it lifted the deferral," said Seoul's foreign ministry, in a statement.

One of the sanctioned vessel Sevastopol entered a port of Busan on Aug. 13 for repairs, according to the South Korean foreign ministry.

On Monday, Russia's foreign ministry summoned South Korean ambassador in Moscow and demanded that the South Korean government allow the vessel to leave the port, according to Russian news agency Tass.

World News // 10 hours ago
UNICEF calls for children to be evacuated from Syrian prison
Jan. 25 (UPI) -- The United Nations Children's Fund on Tuesday called on the international community to help more than 800 children imprisoned in a military detention facility in northeast Syria.

World News // 18 hours ago
Surgeon who auctioned X-ray of Bataclan shooting victim as NFT facing legal action
Jan. 25 (UPI) -- A French surgeon is facing legal action and condemnation after auctioning an X-ray of a gunshot wound from a victim of the 2015 massacre at the Bataclan theater in Paris where 90 people were killed. 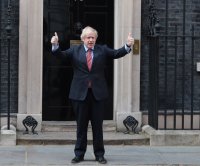 World News // 23 hours ago
Scotland Yard investigating COVID-19 lockdown parties attended by Boris Johnson, others
Jan. 25 (UPI) -- Amid calls for his resignation, British Prime Minister Boris Johnson and other government officials became the target of a police investigation over parties that were held at 10 Downing Street during COVID-19 lockdowns. 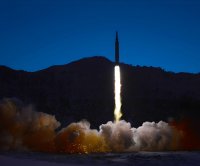