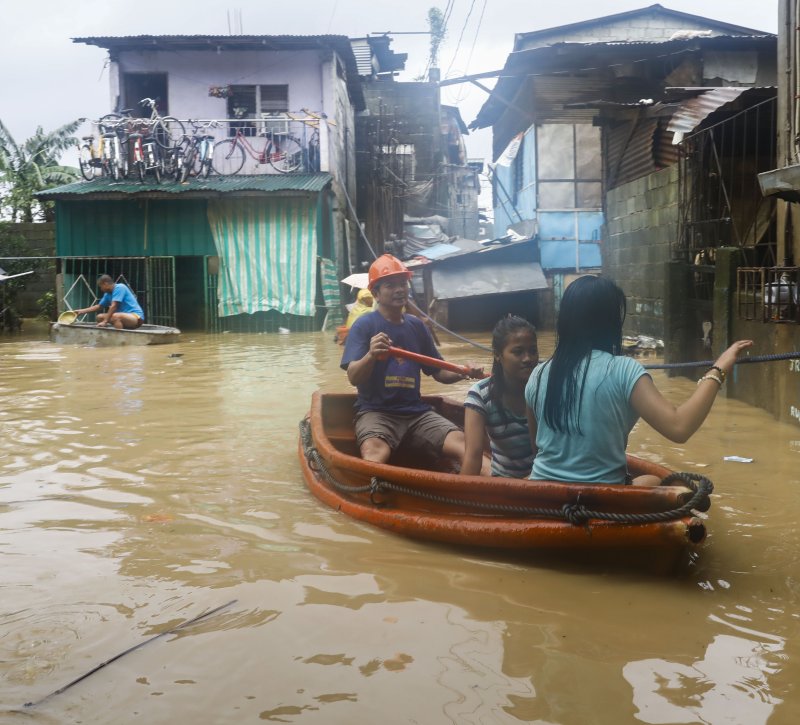 Residents ride a raft in floodwaters in San Mateo town of Rizal Province, east of Manila, Philippines, on Saturday. Mangkhut is the most powerful typhoon to strike the Philippines in the last five years, made landfall in the northeastern town of Baggao. Photo by Rolex Dela Pena/EPA

Sept. 15 (UPI) -- Typhoon Mangkhut, one day after it made landfall as the strongest storm to hit the the Philippines in five years, has killed at least 16 people, an official said Saturday.

Packing sustained winds of around 120 miles per hour and gusts up to 150 mph as a Category 5 storm, the 550-mile wide storm arrived at 1:40 a.m. local time Friday in Cagayan province.

By 7 p.m., Mangkhut's eye was about 150 miles off its west coast of Laoag City, according to the Philippine Atmospheric, Geophysical and Astronomical Services Administration. It was moving northwest at 15.5 mph and was expected to leave the Philippines later that night.

Mangkut, named internationally after the Thai word for a fruit in Southeast Asia but known in the Philippines as Ompong, had crossed Luzon, the Philippines' largest island, and was headed for Hong Kong and southern China. It was 300 nautical miles southeast of Hong Kong, according to the Joint Typhoon Warning Center of the United States Navy. It will rapidly dissipate as it interacts with rugged terrain, the Navy said.

In the Cordillera mountains, a family of four died when they were caught in a landslide in their home, Filipino official Francis Tolentino said in a New York Times report. And local news media reported that landslides also killed two rescue workers.

Also a young girl was found in the Marikina River in the eastern part of metropolitan Manila, which appeared to avoid major damage. The Manila area, which has 12 million residents, is vulnerable to the typhoons that sweep in from the Pacific.

"This was the strongest and the worst storm that I've ever experienced in my life," Teresita Antonio, 54, told The New York Times in Claveria, a corn- and rice-growing area on Luzon's northern coast. "I was crying before because I don't know how I will be able to afford to fix my house."

Her family had had fled their home. But her son, Marck James Antonio, 24, stayed and was hit with flying debris.

More than 105,000 people had taken shelter in evacuation centers as the country beefed up planning after Typhoon Haiyan in 2013 storm killed 6,000 people and left more than 4 million homeless.

The storm could hit Hong Kong and China's Pearl River Delta area, which has more than 60 million people and is a manufacturing hub.

Hong Kong is not especially vulnerable to flooding because it has few low-lying areas.

World News // 10 hours ago
Afghanistan faces hunger, economic collapse, other crises one year after Taliban's return
Aug. 15 (UPI) -- The Taliban on Monday celebrated the one-year anniversary of their return to power in Afghanistan after U.S. forces ended a 20-year campaign, but experts say the country is now dealing with multiple crises.

World News // 2 hours ago
U.S. reports no casualties in 'ineffective' drone strike near U.S. base in Syria
Aug. 15 (UPI) -- U.S.-backed coalition leaders condemned an unsuccessful drone attack near the Tanf base in southeast Syria, which houses U.S. troops and their Syrian allies. U.S. forces reported no deaths, no injuries and no damage.

World News // 5 hours ago
Egypt church fire: Officials say smoke, stampede killed most of the dead
Aug. 15 (UPI) -- Egyptian authorities said on Monday that most of the deaths from a fire at a Coptic Christian church in Cairo were due to smoke inhalation the stampede of people rushing to get out.

Prince Harry, Meghan Markle to return to Britain in September