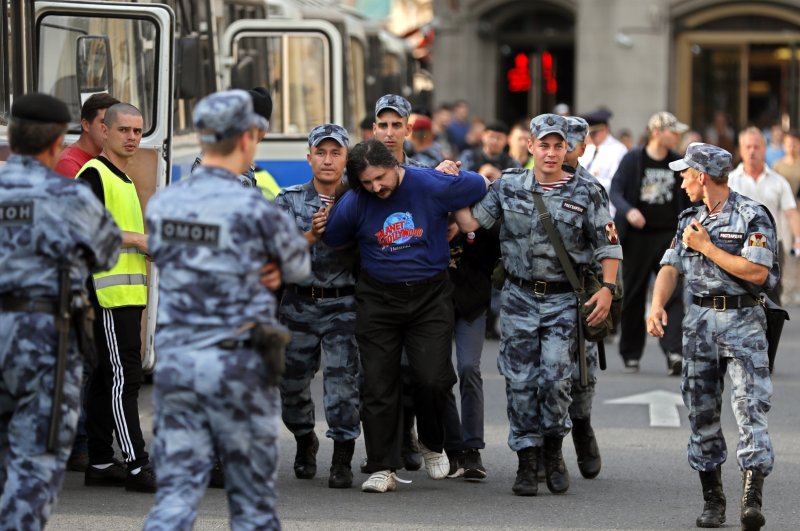 Hundreds were arrested in protests against the Russian governments pension plan Sunday. Photo by Yuri Kochetkov/EPA

Sept. 9 (UPI) -- Hundreds of people were arrested in Russia on Sunday while participating in protests against pension reform.

President Vladimir Putin endorsed the plan, which was submitted by the government to the Russian State Duma, the lower house of parliament.

The plan would increase the age when Russians can retire and collect pension from 60 to 65 for men and from 55 to 60 for women.

Opposition leader Alexei Navalny called for rallies throughout the country and ran advertisements on YouTube encouraging the demonstrations, which Google later removed at the request of Russian officials, The Guardian reported.

"We consider all justified appeals from state bodies. We also require advertisers to act in accordance with the local law and our advertising policies," Google said.

More than 2,500 people gathered in Moscow's Pushkin Square shouting "Putin is a thief!" and "No increase in the pension age!" The protests took a violent turn as protesters tried to march towards parliament and were beaten back by police.

Russian authorities didn't authorize many of the demonstrations, leading some to avoid the areas for fear of arrest.

Putin's approval rating fell from 77 percent to 63 percent after the pension plans were announced in June as about 80 percent of politicians were in opposition.

World News // 34 minutes ago
Leaders ready to 'intensify process' for U.S. to return to Iran nuclear deal
May 7 (UPI) -- High-level talks aimed at returning the United States to the Iran nuclear deal resumed on Friday in Vienna with some indications of optimism at the summit.

World News // 36 minutes ago
Report: U.S. seeks judgment on North Korea sanctions violators
May 7 (UPI) -- The U.S. Attorney's Office for the District of Columbia is seeking to seize about $2.3 million in assets from three entities.