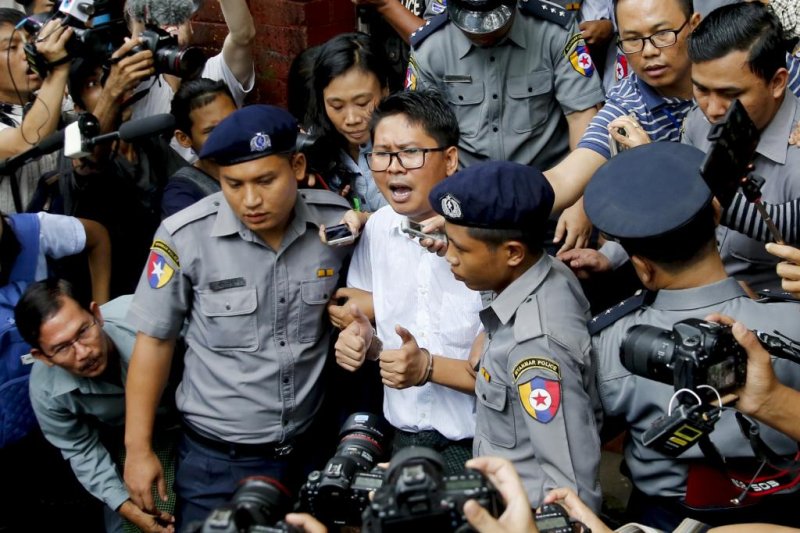 Reuters journalist Wa Lone (C) is escorted out of court in Yangon, Myanmar, on Monday. He and Kyaw Soe Oo were sentenced to seven years prison after they were found guilty of violating a state secrets. Photo by Lynn Bo Bo/EPA-EFE

Sept. 3 (UPI) -- A court on Monday sentenced two journalists to seven years in prison for their reporting of a massacre purportedly carried out by the Myanmar military.

The Reuters reporters were arrested in December after police officers invited them to dinner and handed them the documents for which they were arrested, their attorneys said.

After the sentencing, Wa and Kyaw were taken to prison.

"This is unfair. This decision is one-sided," Wa told reporters as he was put into a police vehicle. "It directly threatens out democracy and freedom of the press. I would like to say it's very disappointing as it's destroyed the democracy of our country and the way we would like to be. We will continue to fight."

Reuters president and editor-in-chief Stephen J. Adler said in a statement: "These two admirable reporters have already spent nearly nine months in prison on false charges designed to silence their reporting and intimidate the press.

"Without any evidence of wrongdoing and in the face of compelling evidence of a police set-up, today's ruling condemns them to the continued loss of their freedom and condones the misconduct of security forces."

Human rights observers and foreign government officials criticized the sentences as retaliation for the work Wa and Kyaw did to uncover a massacre of at least 10 Rohingya men they say was carried out by Myanmar security forces.

United Nations High Commissioner for Human Rights Michelle Bachelet called for the sentence to be "quashed and for them to be released, along with all other journalists currently in detention for their legitimate exercise of the right to freedom of expression."

U.S. Ambassador to the United Nations Nikki Haley called the sentence "another terrible stain" on Myanmar.

"It is clear to all that the Burmese military has committed vast atrocities," Haley said in a statement. "In a free country, it is the duty of a responsible press to keep people informed and hold leaders accountable."

"The conviction of two journalists for doing their job is another terrible stain on the Burmese government," she continued. "We will continue to call for their immediate and unconditional release."

World News // 11 hours ago
Biden anticipates 'long conversation' with Putin about Russia's Ukraine plans
Dec. 4 (UPI) -- President Joe Biden said he is expecting a "long discussion" about the threat of an offensive against Ukraine during an upcoming video conference with Russian President Vladimir Putin.