Iraqis chant slogans and carry banners during a demonstration in front of the headquarters of Basra governorate in Basra, Iraq, on Monday. Photo by Haider al-Assadee/EPA-EFE

An Interior Ministry source told Kuwaiti news agency KUNA that protesters stormed a government building and set it on fire after throwing a grenade at guards. The source said one guard died and forces opened fire, killing at least one protester.

The BBC reported at least five people were dead, though it's unclear if that toll includes the guard. At least 30 people sustained injuries, Rudaw reported.

The government deployed military and security troops to the area, and Iraqi Prime Minister Haider al-Abadi ordered an investigation into the violence.

It was the second day of protests in the southeastern city over a lack of services like drinking water and jobs. Protesters blame government corruption for the collapse of infrastructure.

Iraqi Shiite cleric Moqtada Sadr called the violence a "tragedy" and said he felt sorrow for oppression in Basra.

"What angered me is the unjust infringement by some members of ... security forces against unarmed protesters who do not want anything but to live with dignity and so that efforts are made to rid Basra from corruption, sectarianism and militias," he said.

World News // 50 minutes ago
Global Hawk drone flies near North Korea ahead of Korean War anniversary
July 26 (UPI) -- An unmanned U.S. reconnaissance aircraft flew over the Korean Peninsula ahead of North Korea's observance of "Victory Day," which marks the anniversary of the 1953 Korean Armistice Agreement. 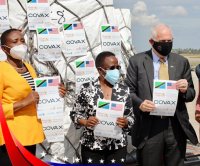