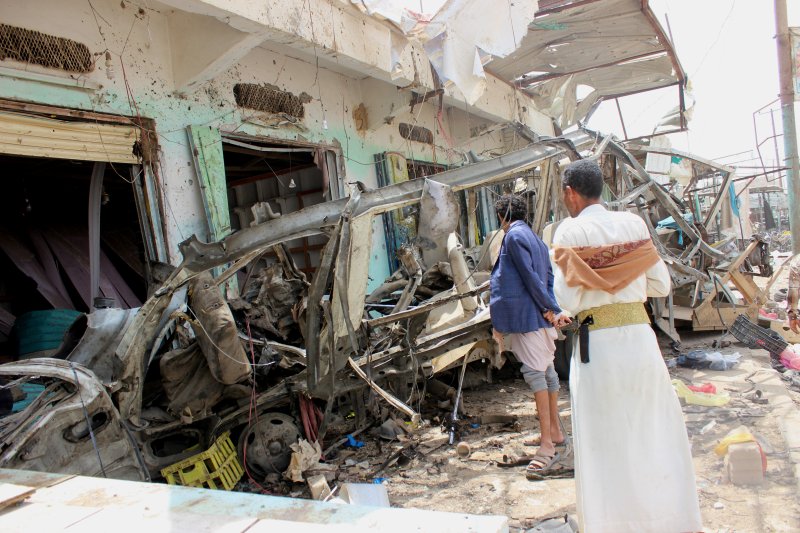 Yemenis inspected a destroyed bus at the site of a Saudi-led coalition airstrike on Aug. 10, a day after the strike hit the bus, which was carrying children at Dhahyan market in the northern province of Saada, Yemen. A coalition investigative team has since admitted the attack was not justified. Photo by Stringer/EPA-EFE

Mansour al-Mansour, official spokesman of the Arab Coalition's Joint Incident Assessment Team, said at press conference Saturday that video from the plane that conducted the strike was analyzed for the report.

Saudi Arabia's official news agency initially reported that the strike was a legitimate military action in retaliation to a Houthi ballistic missile attack and Mansour maintained Saturday it was still a legitimate military target because it had Houthi leaders and led to the killing of a number of Houthi leaders. However, he also admitted that "the raid on Dhahyan does not comply with the coalition's rules of engagement," because the bombing was not justified at the time, since the target was not a threat to the coalition forces.

Mansour also called on the coalition to hold those responsible for mistakes in Dhahyan raid responsible.

In response, the Saudi and United Arab Emirates coalition agreed Saturday with the report and pledged to "hold the ones who committed mistakes accountable."

The attack led to widespread condemnation.

RELATED When Iran's evil regime demands justice, the world can only gasp

U.N. Secretary-General António Guterres condemned the airstrike and offered condolences for the families of the victims. He called on all parties involved in the Yemen civil war to respect international humanitarian law and called for an independent investigation.

Following the bus attack, some Congress members called on the U.S. military to clarify its role in the war and investigate whether support for the air raid could render American military personnel "liable under the war crimes act."

The Saudi coalition, which has had U.S., French and British logistical and intelligence support, has carried out strikes in Yemen to reinstate the internationally recognized presidency of Abdu Rabbo Mansour Hadi, whom rebels drove into exile three years ago.

The United Nations' human rights agency said in a report Tuesday that parties to the civil war in Yemen may have committed war crimes over the three years. At least 6,660 civilians have been killed and more than 10,500 injured in the conflict, according to the Office of the High Commissioner for Human Rights.

Yemen, also reeling from a multi-year cholera epidemic that's killed more than 2,300, has the greatest humanitarian crisis in the world, humanitarian agency Cooperative for Assistance and Relief Everywhere said.

"Since [2015], 22.2 million people are now in need of humanitarian assistance, among which 11.3 million are in acute need of immediate assistance to save or sustain life, mostly women and children," the group said.

In June alone, the coalition carried out 258 air raids on Yemen, nearly one-third of which targeted non-military sites.

World News // 3 hours ago
Fuel price surge hits Lebanon, worsening struggle for food, transport
BEIRUT, Lebanon, Oct. 26 (UPI) -- A new spike in fuel prices in Lebanon is spurred by the inability of the central bank to provide hard currency for fuel imports, the national currency in free-fall again and the rise in global oil prices.

World News // 9 hours ago
Australia pledges to achieve net-zero emissions by 2050
Oct. 26 (UPI) -- Australia, a leading exporter of fossil fuels, said Tuesday it's pledged to lower emissions to net zero by 2050 and make other dramatic reductions by the end of this decade.

World News // 12 hours ago
Japan's Princess Mako marries fiance in Tokyo, gives up royal title
Oct. 26 (UPI) -- Japan's Princess Mako, the niece of Emperor Naruhito, gave up her royal title on Tuesday by marrying her college boyfriend in a ceremony devoid of the typical fanfare that accompany royal weddings in Tokyo.

World News // 11 hours ago
Roh Tae-woo, first president of South Korea's modern democracy, dies at 88
Oct. 26 (UPI) -- Roh Tae-woo, a South Korean activist who was involved in the 1979 military coup and later became the country's first democratically elected president, died on Tuesday at a hospital in Seoul. He was 88.