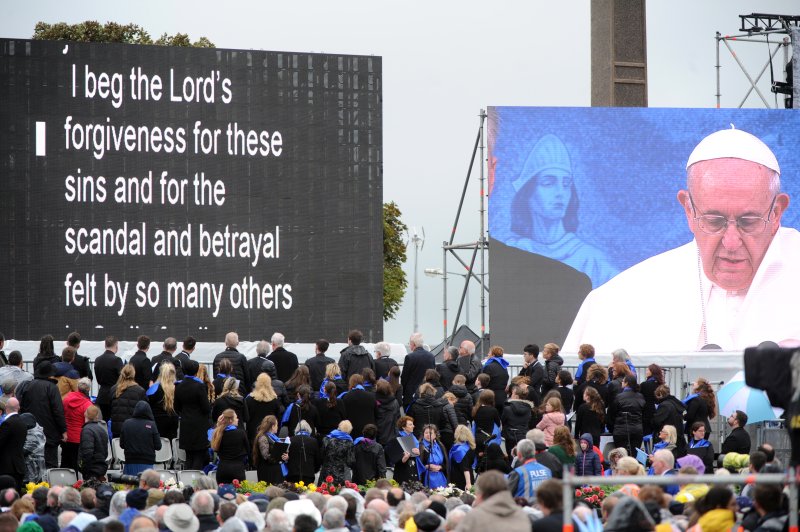 Archbishop Carlo Maria Viganò, a former former papal ambassador to the United States, released a letter Sunday claiming Pope Francis was aware of former Cardinal Theodore McCarrick' sexual abuses as early as 2013 and failed to discipline him. The Pope was in Ireland Sunday where he spoke at a Shrine in Knock and celebrated Mass in Dublin. Photo by Aidan Crawley/EPA

Archbishop Carlo Maria Viganò, a former former papal ambassador to the United States under Pope Benedict XVI, released a letter, published in Italian by The National Catholic Register and in English by LifeSiteNews, stating Francis ignored McCarrick's record of sexual abuse and failed to punish him.

In the letter, Viganò also called on Francis to resign for the good of the church.

"In this extremely dramatic moment for the universal Church, he must acknowledge his mistakes and, in keeping with the proclaimed principle of zero tolerance, Pope Francis must be the first to set a good example for cardinals and bishops who covered up McCarrick's abuses and resign along with all of them," Viganò wrote.

McCarrick, 88, resigned last month after he was barred from publicly practicing ministry amid allegations he abused a teenage altar boy in the early 1970s while he served as a priest of the Archdiocese of New York, which an Archdiocesan Review Board later determined were "credible and substantiated."

Viganò wrote that two other church officials had reports in 2000 and 2006 respectively detailing McCarrick's sexual abuse including that he "shared his bed with seminarians" whom he would invite five at a time to his beach house on the weekends. Viganò added he recommended McCarrick be disciplined in 2006, but was ignored.

He said Benedict eventually "imposed on Cardinal McCarrick sanctions similar to those now imposed on him by Pope Francis" in 2009 or 2010, expelling him from the seminary where he lived, and forbidding him from participating in public Masses, meetings and other religious activities.

Viganò went on to describe a meeting with Francis in 2013 in which the Pope asked "What is Cardinal McCarrick like?" Viganò said he told the Pope of McCarrick record of sexual abuse "with complete frankness," but Francis "did not make the slightest comment" about the allegations, "as if he had already known the matter for some time."

The release of Viganò's letter came as Francis celebrated a Mass at Dublin's Phoenix Park at the end of his two-day trip to Ireland.

At the Mass on Sunday, Francis asked for forgiveness for abuses of power and sexual abuse in Ireland by church leaders.

RELATED Pope Francis on sex abuse report: 'We showed no care for the little ones'

"In a special way we apologize for all the abuses committed by institutions run by male and female religious and other members of the church. And we ask for forgiveness for the crimes so many minors were subjected to," he said.

He added that "some members of the hierarchy didn't own up to these painful situations and kept silence."

Francis also sought forgiveness for the church's history of separating unmarried mothers from their children and called for them to reunite.

"For all those times when it was said to many single mothers who tried to look for their children who had been estranged from them, or to the children who were looking for their mothers, that it was a mortal sin," he said. ""This is not a mortal sin. It is the Fourth Commandment! We ask for forgiveness."

Earlier Sunday the pope prayed at a shrine in the village of Knock where he prayed the Virgin Mary to heal those who were abused within the church.

"None of us can fail to be moved by the stories of young people who suffered abuse, were robbed of their innocence, who were taken from their mothers, and left scarred by painful memories," he said. "This open wound challenges us to be firm and decisive in the pursuit of truth and justice. I beg the Lord's forgiveness for these sins and for the scandal and betrayal felt by so many others in God's family."

World News // 3 minutes ago
Israel moves forward with Sunday's flag march despite concerns over violence
May 27 (UPI) -- A controversial flag march in Jerusalem on Sunday will go through the Damascus Gate and the Muslim Quarters, sparking concerns of violence as the event leads to the Western Wall.

World News // 22 hours ago
Former Louvre director charged in fraud, trafficking case
May 26 (UPI) -- A former director of the Louvre Museum in Paris is facing charges related to trafficking and fraud accusations.

World News // 1 day ago
Antony Blinken stresses diplomacy in dealing with China over Taiwan
May 26 (UPI) -- Secretary of State Antony Blinken tried to definitively squash concerns over possible military involvement by the United States on behalf of Taiwan on Thursday.

World News // 1 day ago
British watchdog investigating Google over dominance in digital ad market
May 26 (UPI) -- Britain's antitrust watchdog says it's investigating tech giant Google over its dominance in the technology advertising market -- which is the second time this year that the company is facing such an inquiry.
Advertisement