Pope Francis speaks during his Sunday Angelus Prayer from his office's window overlooking St. Peter's Square at the Vatican on July 29. Photo by Massimo Percossi/EPA-EFE

Aug. 21 (UPI) -- Pope Francis hopes to meet privately this weekend with victims of the sex scandal involving the Catholic Church when he travels to Ireland, the Vatican said Tuesday.

Any meetings between the victims and the pope would not be revealed to the public, as is customary, Vatican spokesperson Greg Burke said.

If information is released, it will be after the meetings and solely up to the victims.

"The most important thing for the pope in these moments, is that it be a moment of prayer, silence and listening," Burke said.

The Vatican said no meetings were scheduled as of Tuesday.

On Monday, the pope acknowledged the failure of the Catholic Church to act on the reports of sexual abuse by priests against children.

His unusually forceful "Letter to the People of God" referred to a Pennsylvania grand jury report last week that outlined abuse by priests and cover-up efforts by leaders in six Catholic dioceses in the state.

The report cited internal church documents that showed more than 300 credible sex abuse reports accusing priests and involving more than 1,000 children. Some of the documents were held in a secret archive, for which only a diocesan bishop held the key, the report said.

While in Ireland, the pope will pray silently in the Blessed Sacrament Chapel of St. Mary's Cathedral, where a candle has been burning for the victims of abuse.

The pope is scheduled to deliver six speeches during his 36 hours in Ireland, the Vatican said.

World News // 49 minutes ago
Britain signs 1st post-Brexit trade deal with Australia to cut out tariffs
June 15 (UPI) -- Britain on Tuesday brokered its first free trade deal since leaving the European Union 18 months ago by signing a what it called a historic new agreement with Australia. 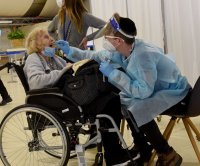