A man walks along a flooded street in India's Kerala state on Thursday. Heavy rain led to landslides in which at least 37 people were killed, and 69 tourists were stranded at a resort. Photo by Prakash Elamakka/EPA-EFE

Aug. 10 (UPI) -- At least 26 died in landslides in India's Kerala district caused by rainfall, and 69 tourists are stranded at a resort, officials said on Friday.

Rains in the mountainous Indikki district, an area in southern India famous for growing tea, led to landslides that have buried villages and blocked roads. The tourists, including 20 foreigners, are marooned at the Hotel Plum Judy resort. The Indian military was called to aid the National Disaster Response Force in rescuing the tourists, NDTV reported on Friday.

The U.S. consulate in Chennai issued a travel alert and warned U.S. citizens to avoid visiting the area. It is unknown if any of those stranded at the resort at Americans.

North Kerala's Wayand district is completely cut off by the landslides, and military personnel are working to restore its road network.

Twenty-four dams across the area, connected to reservoirs holding excess rainwater, were opened. One, at the Indikki reservoir and itself a tourist attraction, had three of its five sluice gates opened after the water level within the reservoir rose to 2,401 feet, only two feet below its maximum capacity. The flow of water inundated downstream areas, although casualties were restricted because of proper planning, a government official told the Hindustan Times.

World News // 6 hours ago
Airline makes history on journey to the 'end of the world'
Charter airplane operator Hi Fly successfully landed an Airbus A340 on the frozen landscape of Antarctica for the first time.

World News // 11 hours ago
U.S. lawmakers visit Taiwan, China responds dismissively
Nov. 26 (UPI) -- A delegation of five U.S. lawmakers visited Taiwan on a two-day trip to meet with the island's leaders despite calls from the Chinese government to cancel the trip.

World News // 18 hours ago
COVID-19 strain Omicron named 'variant of concern,' EU, U.S. to restrict travel
Nov. 26 (UPI) -- The WHO on Friday said a new strain of COVID-19, which originated in South Africa and has been named Omicron, is a "variant of concern," while the European Union and United States moved to block travel to the region. 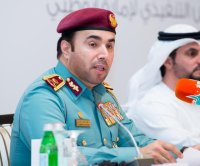