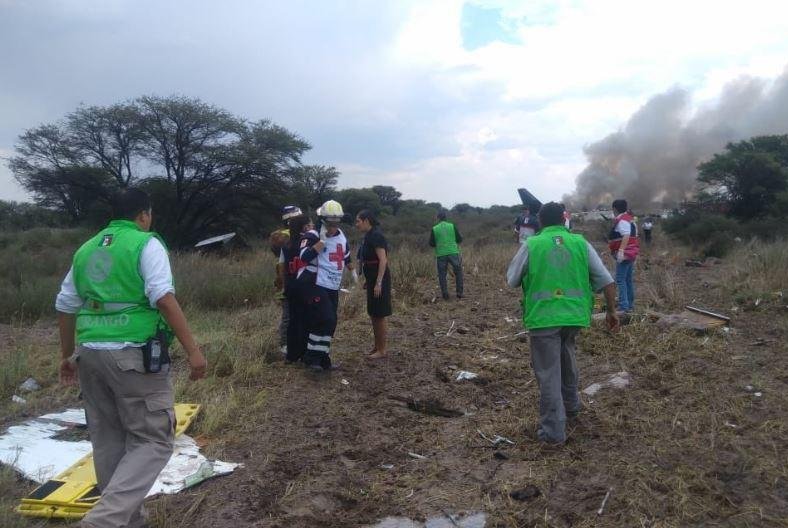 Aug. 1 (UPI) -- A passenger aboard an Aeromexico jetliner that crashed in Mexico after takeoff Tuesday captured video of the accident.

The plane crashed after taking off from General Guadalupe Victoria International Airport in Durango. It was headed for Mexico City.

Passenger Ramin Parsa began recording the takeoff and kept the camera going until the crash. She posted the video online Wednesday.

The starts from Parsa's window-seat view as the plane lifted off in stormy weather. Moments later, she dropped the phone and the video went dark. Chaos in the passenger cabin, though, is still heard.

"We were praying when we got away from the wing. Children were crying. People were burned, their hands and their feet," Parsa told NBC News Wednesday.

The passengers escaped from the emergency slides not long before the plane caught fire. At least 85 of the 97 passengers were injured, two critically. Dozens were hospitalized. None of the 103 passengers or crew died.

A health official said some survivors were burned up to a quarter of their bodies. Pilot Capt. Carlos Meyran received serious injuries that required surgery.

"The second impact was a lot stronger. This is when I jumped and hit my head against the ceiling," Estrada said. "After the second impact, I saw flames in the cabin ahead of me."

Aeromexico offered support, thoughts and prayers to those affected and their families.

"Our heart is with those affected and their families. We are deeply saddened by this incident, and we would like to assure everyone that We are doing everything in our reach to assist them and their families," said Andres Conesa, the chief executive of Aeromexico.

World News // 8 hours ago
Child soldiers massacre 138 in Burkina Faso
June 24 (UPI) -- The government of Burkina Faso said Thursday that child soldiers were used to carry out a massacre that killed at least 138 people in the village Solhan earlier this month.

World News // 17 hours ago
North Korean workers, volunteers warned against disobedience
June 24 (UPI) -- North Korean workers have no right to refuse state orders, the regime's media said Thursday, as the country could be preparing to overcome a food shortage amid the coronavirus pandemic.

World News // 19 hours ago
Hundreds of child remains found at old indigenous school in Canada
June 24 (UPI) -- Hundreds of remains have been found in unmarked graves at a former Canadian school for Indigenous children in Saskatchewan, the second such discovery in the country over the past month.

World News // 20 hours ago
South Korea discloses list of Korean War abductees for first time
June 24 (UPI) -- South Korea is disclosing the names of thousands of citizens who were abducted to the North during the 1950-53 Korean War, a first for the country in seven decades.

World News // 21 hours ago
Russia warns Britain over ship near Crimea, says video shows warning shots
June 24 (UPI) -- Amid a military skirmish involving a British warship in the Black Sea and purported warning shots fired by Russian forces, Moscow hinted on Thursday that next time they might target the ship itself.
Advertisement