July 31 (UPI) -- At least 85 passengers on an Aeromexico flight were injured when the plane crashed, shortly after takeoff, in the Mexican city of Durango on Tuesday.

Fernando Rios, a spokesperson for Durango's State Coordination of Civil Protection said a total of 85 passengers on the Mexican airline flight were injured, including two who were critically injured, ABC News reported.

Durango governor José R. Aispuro Torres said no one was killed in the crash.

"It is confirmed that there were no deaths following the accident of flight Aeromexico 2431," he wrote on Twitter. "At this moment on behalf of the cabinet, led by Coordinator Rosario Castro, to attend to the injured and cooperate with airport authorities with what has occurred."

The airline said the plane was an Embraer 190 with a capacity of 100 passengers, flying between Durango and Mexico City.

There were 97 passengers and four crew members onboard the flight when it crashed, Secretary of Communications and Transportation Gerardo Ruiz Esparza wrote on Twitter.

All passengers onboard the plane were transported to local hospitals and some were able to walk away from the crash to a nearby road. A fire broke out as a result of the crash, but none of the passengers appeared to sustain burns, Durango Civil Protection spokesperson Alejandro Cardoza said.

RELATED 33 passengers die when bus crashes into gorge in India

The plane crashed around 4 p.m., about 10 miles from General Guadalupe Victoria International Airport , the Mexican Transportation Ministry said, according to NBC News.

Aispuro Torres told reporters the plane was attempting to abort takeoff due to bad weather, but was unable to and crashed at the end of the runway.

"We can say that the airplane was not even able to take off at the moment it was forced to land. We do not know if it was a mechanical failure," said Cardoza.

World News // 3 hours ago
South Korea discloses list of Korean War abductees for first time
June 24 (UPI) -- South Korea is disclosing the names of thousands of citizens who were abducted to the North during the 1950-53 Korean War, a first for the country in seven decades.

World News // 5 hours ago
Russia warns Britain over ship near Crimea, says video shows warning shots
June 24 (UPI) -- Amid a military skirmish involving a British warship in the Black Sea and purported warning shots fired by Russian forces, Moscow hinted on Thursday that next time they might target the ship itself. 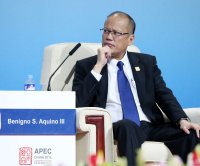