Korean Air Flight 858 (not pictured) was targeted and bombed. The North Korea agent responsible for the incident has accused the South Korean families of victims of being pro-North. UPI | License Photo

July 23 (UPI) -- A coalition of South Korean civic groups are suing a pardoned North Korean agent for defamation, after the defendant, Kim Hyon-hui, may have said publicly the families of perished victims were pro-Pyongyang collaborators.

Kim, 56, who confessed to planting a bomb on Korean Air Flight 858, which exploded mid-air on Nov. 29, 1987, had said in a 2008 letter to Lee Dong-bok, the head of South Korean group North Korea Democratization Forum, the victims' families were trying to overturn the closed case of the flight bombing, Yonhap reported Monday.

According to the plaintiffs, Kim also charged the families of being pro-North, and traitors of the people, during an appearance on a South Korean YouTube channel in January.

The accusations from Kim are part of her opinion on the former Roh Moo-hyun administration, and its alleged decision to "overturn" the bombing case. Kim had aired those views publicly in 2014.

The charges have enraged the survivors.

Cha Ok-jung, 81, told local news service EDaily her husband, was one of the Korean Air pilots who died on the flight.

"My husband was a graduate of the Korean Air Force Academy, and devoted his life to his country," Cha said. "Whenever I think about this incident, I shake with aggravation. I hope the South Korean public will help us to clear the truth."

Roman Catholic priest and activist Shin Seong-kuk said at the group's press conference on Monday Kim had "vowed" to help the survivors' families for the rest of her life.

But Kim has never followed through on her promises, Shin said.

Kim once described her actions as a "heinous crime."

A total of 115 people died on the flight.

World News // 29 minutes ago
WHO team studying COVID-19's Wuhan origins exits quarantine
Jan. 28 (UPI) -- A team of experts with the World Health Organization on Thursday completed their two-week quarantine in the central Chinese city of Wuhan where they are to investigate the origins of the coronavirus pandemic.

World News // 10 hours ago
Indonesia's Mount Merapi produces thunderous eruption
Mount Merapi, the most active volcano in Indonesia, erupted Wednesday, sending a river of lava down its slopes and causing searing gas clouds to billow 10,000 feet into the sky. 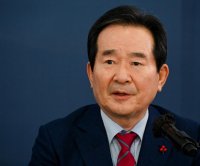