The state-run TASS news agency reported the upgraded air defense missile is "capable of intercepting single and multiple strikes, including with the use of new generation intercontinental ballistic missiles."

The anti-missile system is designed to protect Moscow against space attacks.

"They kept ignoring us," Putin said of NATO members in a state of the union address that described the weapons. "Nobody wanted to listen to us, so listen to us now."

The missile test also comes a day after Putin accused some in the United States of trying to damage U.S.-Russia relations for "narrow party interests."

Thursday, the White House said an invitation has been extended to Putin to visit the United States this fall for another summit with President Donald Trump. Friday, Russia's ambassador to the United States said the Kremlin is ready to consider the invitation.

World News // 14 hours ago
K-pop's Seungri charged with deploying gangsters at bar
Jan. 15 (UPI) -- A South Korean celebrity who owned a nightclub in Seoul that shuttered after multiple rape incidents was indicted for mobilizing gang members.

World News // 15 hours ago
Russia says it will follow U.S. in abandoning Open Skies Treaty
Jan. 15 (UPI) -- The Russian government announced Friday that it will withdraw from the Open Skies Treaty -- a 30-year-old pact among 34 nations that permits unarmed surveillance flights -- after the United States dropped out last fall.

World News // 16 hours ago
Dutch gov't collapses under weight of childcare repayment scandal
Jan. 15 (UPI) -- A major scandal in the Netherlands -- which wrongly accused parents of fraud related to payments for childcare benefits, and forced them to repay that money -- led to the collapse of the entire Dutch government on Friday

World News // 19 hours ago
Indonesia hunts for survivors after deadly quake in Sulawesi
Jan. 15 (UPI) -- A search for survivors is underway in Indonesia after a 6.2-magnitude earthquake hit the country's Sulawesi Island. 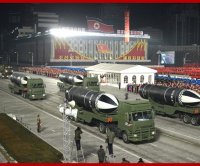