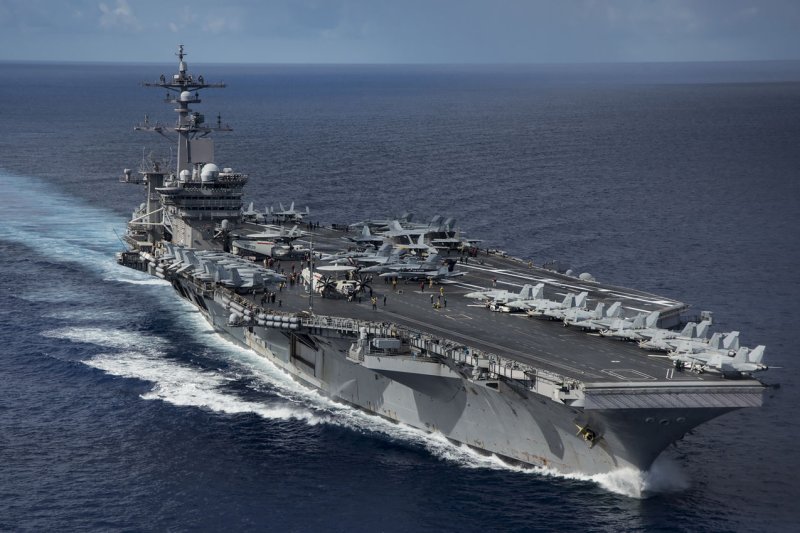 July 9 (UPI) -- A Chinese military expert says he expects more U.S. activity in the Taiwan Strait, after two U.S. Navy ships sailed through waters that lie between China and Taiwan.

He said China cannot rule out the possibility the United States could send a nuclear-powered aircraft carrier to the Taiwan Strait within the month.

The United States has previously deployed a nuclear carrier, the USS Nimitz, to the Taiwan Strait in 1996, after China warned the Taiwanese electorate against voting for Lee Teng-hui in the presidential election by launching missiles near Taiwan.

Chen also said the tariff dispute between China and the United States is a prelude to more "strategic competition" between the two rivals.

"U.S. provocations toward China will take place across all fronts, and mainly through the military and trade," Chen said.

The United States has placed $34 billion in tariffs on Chinese goods, and Beijing has retaliated with a corresponding 25 percent increase in taxes on U.S. products.

RELATED NATO at a crossroads or a precipice?

The Chinese military has so far refrained from issuing statements on the U.S. Navy ships, but Liu Jieyi, director of the mainland's Taiwan Affairs Office and China's former ambassador to the United Nations, said China "staunchly opposes any move that harms China's national interest."

"We won't accept that," Liu said, according to Taiwan's Central News Agency.

Chinese state tabloid Global Times slammed the U.S. maneuvers, calling the move a "discreet approach" and agreeing with Chen that Washington "may send larger warships to the Taiwan Strait, conduct military training and drills, and even collaborate with Taiwan's military in an attempt to deter the mainland."

"Washington will not succeed. The mainland's military strength has improved greatly since the 1996 crisis and is capable of countermeasures to deter Washington and the Taiwan administration from provocations," the Global Times stated.

World News // 13 hours ago
U.S. lawmakers visit Taiwan, China responds dismissively
Nov. 26 (UPI) -- A delegation of five U.S. lawmakers visited Taiwan on a two-day trip to meet with the island's leaders despite calls from the Chinese government to cancel the trip.