Top Philippines court rules against recovery of Marcos' $1B loot 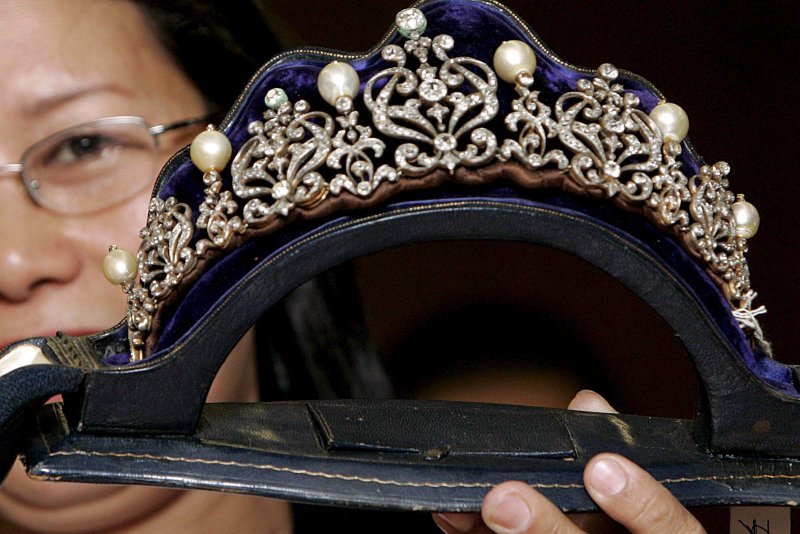 A diamond and pearl tiara was among the jewelry seized from Ferdinand and Imelda Marcos. File Photo by Dennis M. Sabangan/EPA

Marcos, who died in exile in Hawaii in 1989 and ruled the Philippines with an iron fist for two decades with his wife Imelda, accrued illicit wealth through the Construction and Development Corp. of the Philippines, according to the Presidential Commission on Good Government.

"Juxtaposing the specific allegations in the complaint with the republic's documentary and testimonial evidence and as against the respondents' documentary and testimonial evidence...the court agrees with the Sandiganbayan that the weight of evidence fails to preponderate in the Republic's favor," stated Noel Tijam in a 28-page document on the decision.

Judges also said the documents submitted were photocopies of reports, board resolutions, letters of guarantee, and for this reason they were "inadmissible" evidence, according to Rappler.

"Despite knowledge of the existence and whereabouts of the documents' originals, the republic failed to present the same and contented itself with the presentation of mere photocopies," the Supreme Court said.

ABS-CBN News reported the CDCP received public works contracts from government agencies like the Department of Public Works and from the National Irrigation Administration.

Marcos is believed to have embezzled as much as $10 billion, while first lady Imelda Marcos spent her wealth on shoes, jewelry and art during decades of repressive rule.

Ferdinand Marcos' declaration of martial law in 1972 led to the suppression of people's rights that led to thousands of extrajudicial killings and deaths, according to government statistics from 2015.

World News // 3 hours ago
South Korean pastor accused of calling women followers 'prostitutes'
March 1 (UPI) -- A South Korean church leader is coming under fire for allegedly describing the women in his congregation and in the Bible as "prostitutes."

World News // 3 hours ago
Volkswagen says it will unveil autonomous minibus next year
March 1 (UPI) -- After years of a rumored return, Volkswagen's iconic minibus took a step closer to becoming a reality Monday -- and the automaker said it will be a self-driving vehicle.