Spain agrees to open port to 600 migrants in Mediterranean

The U.N. Refugee Agency on Monday pleaded for government officials to accept a boat full of migrants stranded in the Mediterranean. Photo courtesy MSF Sea/Twitter

June 11 (UPI) -- Spain agreed to open its port to a boat carrying more than 600 migrants after it was left stranded in the Mediterranean Sea.

Spanish Prime Minister Pedro Sánchez gave instructions on Monday for Spain to offer a "safe port" to the vessel Aquarius after Italian officials refused to allow the boat to dock.

"It is our obligation to help avoid a humanitarian catastrophe and offer a safe port to these people, as such meeting with the obligations of international law," Sánchez said.

The ship was carrying at least 629 people, including more than 100 children, picked up during six rescue operations off Libya's coast. The migrants come from 26 countries, nearly a quarter of them from Sudan, Sos Mediterranee said.

Matteo Salvini, Italy's Interior minister, tweeted Monday it's "time to say no" to migrants and that Italy has "stopped bowing its head to obey" calls to open its ports.

On Sunday, the vessel was ordered to standby about 30 nautical miles off the Italian and Maltese coasts.

Salvini argued Malta should accept the ship, but its government refused, saying its location falls under Italian jurisdiction.

"They manifestly go against international rules, and risk creating a dangerous situation for all those involved," Muscat said in a tweet.

On Monday, the United Nations Refugee Agency asked for governments to allow the ship to dock.

RELATED Migrant children face challenges in U.S. homes that take them in

"There is an urgent humanitarian imperative here," UNHCR envoy Vincent Cochetel said in a statement. "People are in distress, are running out of provisions and need help quickly. Broader issues such as who has responsibility and how these responsibilities can best be shared between states should be looked at later."

"The principle of rescue at sea must not be put into doubt through incidents like this. Other governments must act to support countries dealing with sea arrivals," Cochetel said.

Italy has seen the arrival of some 13,700 migrants so far this year. 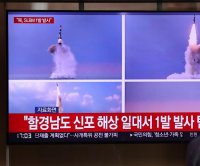