The South Korean blogger identified as "Druking" is seen in this May 16 photo headed to trial in southern Seoul. File Photo by Yonhap

June 1 (UPI) -- South Korean President Moon Jae-in is to receive a list of candidates for a special prosecutor who will investigate an online comment-rigging scandal.

The "Druking" scandal, involving an influential blogger with the surname Kim, interfered with online comments during the presidential race of 2017.

He may have also bribed members of Moon's ruling Democratic Party.

On Sunday, the Korean Bar Association will submit the names of four candidates to Moon.

Following the submission, three opposition political parties -- the Liberty Korea Party, the Bareun Party, the center-left Party for Democracy and Peace -- and progressive Justice party members, will recommend two out of the four candidates, according to News 1.

By Friday the Korean Bar Association had received a list of more than 40 candidates in the legal profession. From this list, a final list of four candidates will be sent to the president.

The far-right Liberty Korea Party is likely to recommend one of the candidates, while the other three parties are likely to haggle over the second candidate, out of the total four, according to News 1.

Once the special prosecutor is appointed, he or she will have 20 days to make preparations for the probe, than complete the investigation into the comment-rigging scandal in 60 days.

Liberty Korea party politicians have been the strongest supporters of the investigation.

The source also said Blue House Secretary for Civil Affairs Cho Kuk has not expressed any intention of resigning.

Cho was asked to resign in April by opposition party politicians for failing to vet a candidate for a government finance position, who used state funds to take overseas business trips.

The Blue House is cooperating with other aspects of the probe, including an investigation into presidential aide Song In-bae, who had worked for lawmaker Kim Kyung-soo.

Rep. Kim was allegedly paid about $25,000 when he was elected a prospective candidate for a governorship in strategically important Gyeonggi Province.

World News // 1 hour ago
Iran fires missile near uranium facility in Natanz after nuclear talks in Vienna
Dec. 4 (UPI) -- Iran fired a missile over the town of Natanz on Saturday amid ongoing international negotiations in Vienna about its nuclear program. 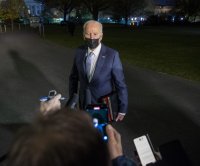 World News // 2 hours ago
Biden anticipates 'long conversation' with Putin about Russia's Ukraine plans
Dec. 4 (UPI) -- President Joe Biden said he is expecting a "long discussion" about the threat of an offensive against Ukraine during an upcoming video conference with Russian President Vladimir Putin.