Japan is monitoring Chinese movements in the high seas near the Senkaku Islands, according to a local press report. File Photo by Hiroya Shimoji/EPA

NHK reported Tuesday the boats were seen near the disputed Senkaku Islands, or Diaoyutai in China.

According to Japan's coast guard's 11th regional headquarters, based in Okinawa, the boats were seen at 7 a.m. in waters adjacent to Uotsuri-shima.

The coast guard ships were again seen at 3 p.m. in an area about 20 miles roughly northeast of Kuba-shima.

Surveillance is ongoing so as to prevent Chinese vessels from coming near Japanese territorial waters, Japan's coast guard stated.

The monitoring is taking place less than a week after four ships of the Chinese coast guard sailed into Japanese territorial waters for about two hours.

On Thursday, the Chinese vessels entered waters near Uotsuri-shima and waters about 19 miles from Minami Kojima.

The recent round of incursions began on May 18.

Japan's foreign ministry complained to the Chinese embassy in Tokyo in response to the maritime forays near Japan-claimed territory, but the move comes at a time when China and Japan appear to be increasing cooperation.

Information ministers from the two countries and South Korea met Monday to discuss ways to boost exchange, according to The Korea Herald.

Topics of discussion included artificial intelligence, fifth-generation networks, the Internet of things and big data, according to the report.

World News // 2 hours ago
DRC declares 2nd Ebola outbreak
June 1 (UPI) -- As the Democratic Republic of the Congo neared declaring over an Ebola outbreak in its eastern provinces, health officials on Monday announced a new cluster has emerged on the other side of the African nation.

World News // 10 hours ago
WHO chief hopes to keep 'generous' U.S. aid after Trump pullout
June 1 (UPI) -- The head of the World Health Organization on Monday praised U.S. contributions to global health and said he hopes there will be more after President Donald Trump's pledge to pull support.

World News // 14 hours ago
British gov't allows many schools, retailers to reopen
June 1 (UPI) -- Retailers and schools across Britain reopened on Monday as the government formally relaxed coronavirus restrictions that kept them closed for months. 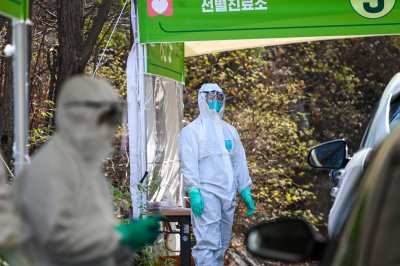