May 18 (UPI) -- North Korea is not responding to a South Korean request to accept a list of South Korean journalists who are scheduled to attend the dismantlement of the Punggye-ri nuclear site.

In the latest sign of Pyongyang's withdrawal from friendlier overtures, North Korea "did not accept" a request from Seoul for communication, local news service No Cut News reported.

"The government today, to follow up on the North's invitation for the planned dismantlement of the Punggye-ri nuclear site on May 23-25, attempted to announce a list of our reporters to the North through Panmunjom, but the North did not accept the communication," Seoul's unification ministry said.

Pyongyang has not canceled the dismantlement, planned for next week, and previously invited journalists from South Korea, the United States, China, Russia and Britain.

That is because Kim's dismantlement was a "pledge with the international community."

Kim and President Donald Trump are scheduled to meet on June 12 in Singapore.

World News // 20 minutes ago
Egypt, Gaza reopen border for three days
Nov. 24 (UPI) -- Egypt on Tuesday temporarily opened its border with Gaza for the first time since blocking access during the beginning of the COVID-19 pandemic.

World News // 7 hours ago
British court says U.S. diplomat's wife shielded from charges in biker's death
Nov. 24 (UPI) -- A British court ruled Tuesday that the wife of a U.S. intelligence officer was protected by diplomatic immunity when she was involved in a crash last year that killed a 19-year-old motorcyclist.

World News // 9 hours ago
Viruses related to coronavirus found in Japan, Cambodia bat samples
Nov. 24 (UPI) -- Scientists in Cambodia and Japan have found coronaviruses in bats related to SARS-CoV-2, as countries around the world experience a resurgence of COVID-19 cases. 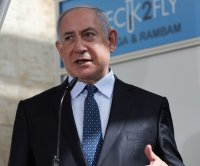